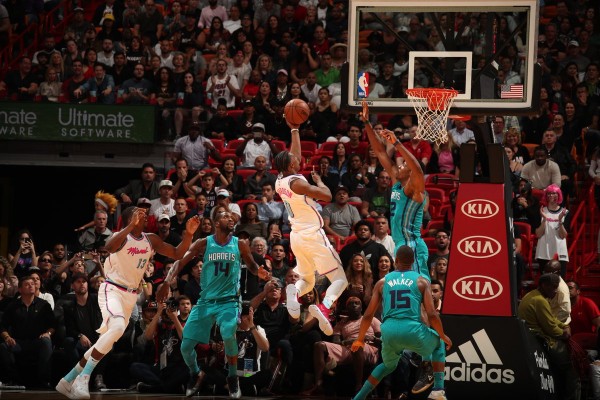 (Miami, FL) – Exactly one week ago, the Miami Heat squeaked out a last-second win over the Charlotte Hornets. On Saturday night, they did the exact same thing when they battled back in the fourth quarter to cap off a thrilling 95-91 victory.

After trailing for the vast majority of the second half, the Heat managed to claw back in the fourth period and had a chance to extend a hard-earned one-point lead with just 28 seconds left on the clock. Miami inbounded the ball with a 92-91 advantage, looking to strike a finishing blow.

Players fought to find an open shot as the game clock continued to wind down. Finally, with just seven seconds left in the game, Wayne Ellington caught the ball at the top of the key, took one dribble, and hoisted a deep 3-pointer. Ellington finished the game with 17 points on 4-of-11 shooting from beyond the arc, but no points were as big as his final three, which gave Miami the 95-91 lead, and the win just seconds later.

After trailing by 15 points late in the third period, Miami seemed to be on its way to a third consecutive loss, but the grit and determination of the Miami roster shined through. Bench players like Kelly Olynyk, Justise Winslow, and Bam Adebayo led the charge, and by the end of the third quarter, the Heat had managed to cut their deficit in half, 78-71.

It was in the fourth quarter, however, that the Heat truly shined. While the offense couldn’t quite get going until the final few minutes, Miami’s defense clamped down, allowing just 13 points in the final frame. Olynyk continued his solid play in the fourth quarter and performed well on both sides of the court, finishing the night with 17 points, six assists, and four rebounds. He and his teammates chipped away at their deficit, and were down just one point, 84-83, with 5:53 left in the game.

The Heat would find themselves down by one point on three more occasions before they finally broke through. Josh Richardson, who finished the night with a team-high 19 points, played a huge role in the win and put the team on his back in the closing minutes. First, he brought the score back to within one point with 2:37 left on the clock when he hit a clutch jumper. Then, just over a minute later, he gave Miami its first lead of the quarter when he drove into the lane, drew the foul on Dwight Howard, and completed the three-point play to give his team a 92-90 lead.

“We don’t try to make them that way, but that’s always the way it seems to turn out. I’m just glad we keep coming out victorious in the majority of them,” Richardson said of the win. “If it has to be like that, that’s the way we have to win, but we just have to learn how to keep leads once we get them.”

With the win, the Heat possess a one-game lead over the Washington Wizards in the Southeast Division. They will look to add some cushion to that divisional lead on Monday night when they head to Dallas to take on the struggling Mavericks.
[xyz-ihs snippet=”HN-300×250-TextnImage”]