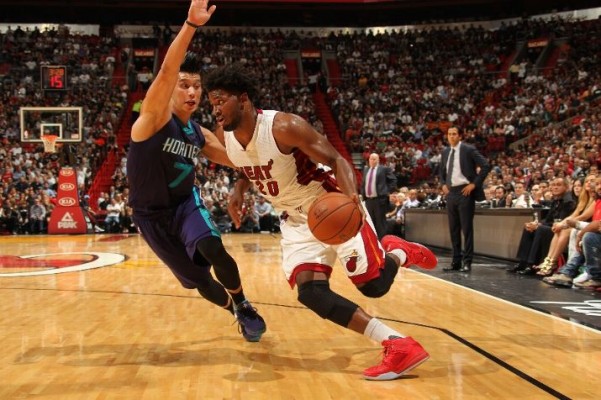 (Miami, FL) — In their first game of the season, the Miami Heat (1-0) gave their home crowd at American Airlines Arena plenty to cheer about as they pulled out a 104-94 victory over the Charlotte Hornets (0-1) on Wednesday night.

It wasn’t all smooth sailing for the up-and-coming Heat squad, as they trailed 27-23 at the end of the first quarter and could not stop Hornets center Al Jefferson early on. In the first 12 minutes alone, Jefferson (who finished the game with 17 points and five rebounds) scored 13 points on six of eight shots.

The Heat flexed their muscle on defense the rest of the way to hold Jefferson and the Hornets in check, as Charlotte only managed to score 33 combined points in the second and third quarters. A furious Hornets rally near the end of the game gave the Heat a little scare after Charlotte cut a 20-point deficit to five points late, but the home team got the job done on the defensive end to secure a win.

“I gotta give credit to the cap UD (Udonis Haslem) because he got on us a little bit,” said Heat power forward Chris Bosh after the game. “We need that fire from him and he instilled that passion in us. He spoke the truth. We were giving up too many easy shots, fouling too much, and we were putting them on the line by giving them too many easy situations. We tightened that up and once we did that, it was off to the races and we got into our strengths.”

Bosh, who played in his first regular season game since February 11th, racked up a double-double with 21 points (five of 13 from the field) to go along with 10 boards.

“It’s always awesome any time I get to lace them up in an NBA game,” said Bosh. “I have to give credit to the crowd for coming out and wearing these awesome t-shirts. It reminded me of a playoff game just a little bit, but it’s good to be back.”

The 10-time NBA All-Star and two-time NBA champion was one of four Heat players to score in double figures on Wednesday night, as shooting guard Dwyane Wade added 20 points, five assists and three boards on the night. Small forward Luol Deng, who iced the game late in the fourth quarter with a three pointer, finished with 13 points and three rebounds.

Newcomer shooting guard Gerald Green, who was acquired over the offseason following his tenure with the Phoenix Suns, came off the bench to score 19 points (seven of 15 shots made from the field and five of eight from beyond the arc).

Up next, the Heat will travel to the Midwest to take on the defending Eastern Conference champion Cleveland Cavaliers (1-1) on Friday night at Quicken Loans Arena. The primetime matchup, which is scheduled to tip off shortly after 7:00 pm ET, will be broadcast nationally on ESPN.
[xyz-ihs snippet=”Responsive-Ad”]