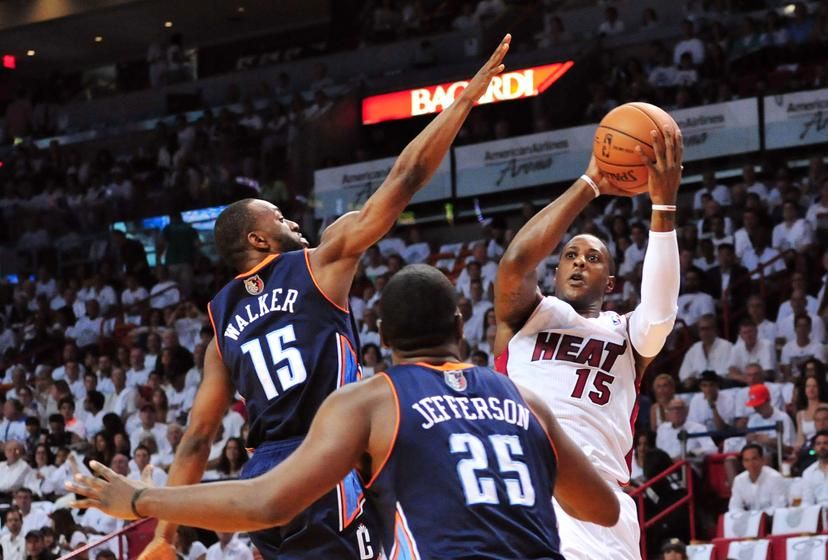 (Charlotte, NC) — Every beginning has an end. The Miami Heat (3-1) found out the hard way on Tuesday night.

In a matchup of undefeated teams, the Houston Rockets ran over the Heat by a final score of 108-91. Chris Bosh was limited to just 30 minutes due to early foul trouble and the Rockets’ James Harden posted a near triple-double with a stat line of 25 points, 10 assists and nine rebounds.

Houston had their way with Miami by dominating beyond the arc. The team hit 17-of-37 from 3-point range. The Rockets went on a 13-0 run late in the fourth quarter to pull away from the Heat.

Coach Erik Spoelstra blamed it more on mental fatigue than anything else for the team’s shortcomings late in Tuesday night’s loss:

“That’s tough at the end. Probably more mental breakdowns than anything else physically going down the stretch…you do have to credit them. They don’t make it easy. They have a high-octane offense.”

The Heat’s Justin Hamilton attributed the breakdown to the team’s defensive woes:

“We just broke down on a couple things on defense. They knocked down some pretty tough 3’s. And we just kept taking their blows and fighting back, but we were never able to go over that hump. We just need to watch the film and come back stronger tomorrow.”

While the loss stings, the Heat will have to quickly recover if they look to bounce back–they visit the Charlotte Hornets (1-3) on Wednesday night.

Miami defeated Charlotte in the first round of the 2014 NBA playoffs, by a final series result of 4-0. However, less than a season later, both rosters appear much different. The Heat return just six players from last season’s opening night roster, while the Bobcats have four new rotational players in Lance Stephenson, Marvin Williams, Brian Roberts and Jason Maxiell.

Thus far, the Hornets have struggled early on in the season. Despite making the playoffs last season and winning their opening night game, Charlotte has dropped three consecutive games. Much of the team’s struggles have been due to their lack of offensive firepower, as the team ranks 27th in the league with 90.3 points per game.

Much like the Heat, the Hornets too, lost their game on Tuesday night, by a score of 100-91 to the New Orleans Pelicans.

Charlotte coach Steve Clifford blamed the team’s loss on a lack of effort more than anything:

“We didn’t keep playing, keep competing for every possession. We had stretches of the game where we played well, but just basic stuff, not running back, not getting our defense set and blown coverages. Those things are on me.”

While the team’s big free agent acquisition, Stephenson, has led the team in rebounds (9.3) and assists (6.0) per game, he’s shooting a miserable 27 percent from the field. The team’s second-leading scorer, Kemba Walker, is averaging 14.5 points per on 32 percent shooting. This is a team that struggles to get good looks and is heavily-reliant on their No. 1 scorer, Al Jefferson.

On the other side of the court, the Heat rank sixth in points per game and fourth in offensive rating. Despite their offensive struggles, the Hornets compensate for their lack of offense with a stingy defense which ranks fifth in the NBA, allowing just 93.3 points per game.

The Heat will hope for a boost as Chris Andersen, Danny Granger and Udonis Haslem missed Tuesday night’s game. Andersen has missed the past few games due to a bruised rib injury, while both Granger (hamstring) and Haslem (quad) have yet to be active this season.

Though Miami has had their issues with injuries, the Hornets can feel some of their pain. Michael-Kidd Gilchrist missed Tuesday night’s loss due to bruised ribs suffered in Sunday’s loss to the New York Knicks. His status versus the Heat is still unclear.

Due to the Heat’s banged-up frontline, Hamilton was forced to play major minutes in the loss to the Rockets. In just his 11th career game, Hamilton guarded Houston’s Dwight Howard for most of the contest. He contributed nine points and seven boards in 31 minutes of action.

Hamilton stated the following in regards to seeing so many minutes in the previous game:

“We’re short on bigs and we got into some foul trouble. So I did what I could to help the team win. But we just need to keep grinding, and when we get our guys healthy, we’ll move on to the next rotation.”

Regardless of Miami’s situation with their bigs, they’ll have to adapt quickly in their second back-to-back of the season when they take on the Hornets at Time Warner Cable Arena at 7:00 pm EST on Sun Sports.
[xyz-ihs snippet=”Responsive-Ad”]