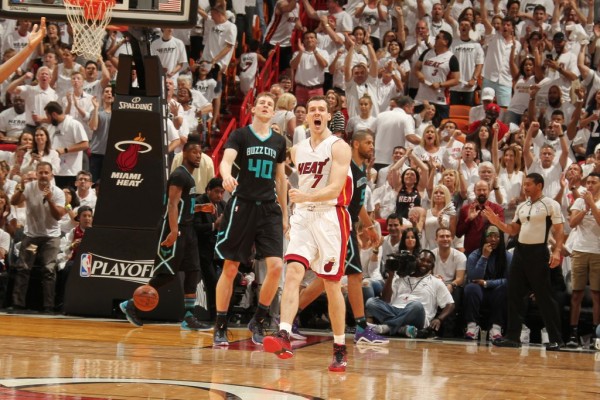 (Miami, FL) –  When it comes to the importance of Game 7’s in sports, fans expect the absolute best from their team to get the job done.

Heat point guard Goran Dragic showed why he’s worth the five-year, $90 million contract he was given last June by going off for a game-high 25 points (11-of-17 from the field), six rebounds and four assists.

“I just got more room to operate,” said Dragic. “I felt more comfortable and the players, they trust me, even when I miss a shot they keep supporting me.”

With 4:58 left in the second quarter and Miami maintaining a 45-38 lead, center Hassan Whiteside blocked Charlotte center Al Jefferson’s shot on one end of the floor and Dragic pulled a ridiculous spin move at the other, as he put a beautiful reverse layup off the glass and through the hoop. Dragic’s stellar play this afternoon brought Heat fans and his teammates to their feet, while head coach Erik Spoelstra was very proud of his point guard.

“What I love about Goran is he continues to focus on doing his job and getting into the competition,” said Spoelstra after the game. “Kemba Walker is one of the very best in this league. It’s a travesty he’s not an All-Star. In a 7-game series, so many things can happen. Sometimes, one guy will get the best of the competition and you have to be mentally stable enough … Goran was not discouraged. He wanted to produce for the guys. One of it was getting through foul trouble early in the series. Competing on the ball would wear on him and then he found opportunities to really be aggressive. He had the most energy today. Goran had to be a big factor for us tonight.”

Up by a score of 54-42 at halftime, the Heat blew the doors off the Hornets in the second half to say the least. Miami outscored Charlotte by a 29-11 margin in the third quarter and led by as many as a whopping 38 points in the final frame.

The Heat were a force defensively, as they held the Hornets to 32.1 percent shooting for the game and outrebounded them 58-36. Whiteside had himself yet another double-double with 10 points, 12 boards and five blocks while Gerald Green came off the bench to score 16 points.

“I’m not a prophet or anything, but I knew we were winning this game,” said Wade during his postgame press conference.

“We had a great year, for our team,” said Hornets head coach Steve Clifford. “The NBA is about winning in the playoffs. We can take this and learn from it. I am proud of our guys. I thought they played a good series [before] today. Any level, you’re going to be viewed by how you do in the playoffs. That’s more than fair. We had a terrific regular season. This would have been a huge win for our franchise. I’m still proud of our guys. This wasn’t like 4-0.”

Following a monster game in which he scored a game-high 37 points in the Hornets’ 97-90 loss in Game 6, point guard Kemba Walker struggled mightily from the field as he finished 3-of-16 from the floor for only nine points and six assists.

Up next, the Heat will face the winner of tonight’s Game 7 between the Toronto Raptors and Indiana Pacers in the Eastern Conference semifinals. Miami will begin the series on the road if the second-seeded Raptors win and will have home-court advantage if the seventh-seeded Pacers emerge victorious.
[xyz-ihs snippet=”Responsive-Ad”]