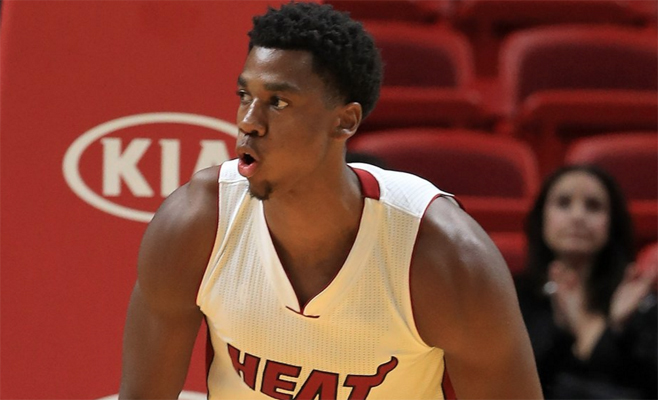 (Miami, FL) – On a night where they paid their respects to late Miami Marlins pitcher José Fernandez with his number and initials on their shooting shirts, the Miami Heat (2-1) put together a complete team effort in their dominating 121-100 victory over the Brooklyn Nets (1-2) on Tuesday night at American Airlines Arena.

“Just unite, man. There’s a lot to be thankful for. I met José and he was an amazing guy. He was really the life of that locker room and his personality was just amazing, you know,” Hassan Whiteside said of his friendship with Fernandez.

With Fernandez’s teammate and current Marlins second baseman Dee Gordon in attendance sitting courtside, the Heat played their best game of the preseason. Rising star center Whiteside, who is now shooting a ridiculous 25-of-35 from the field in three preseason contents this season, was dominant yet again on Tuesday night with 21 points (including 11 points on 5-of-6 shots made in the first quarter), 14 rebounds and four blocked shots.

“I just wanted to come out here and lead by example and be a more vocal leader. My teammates are really trusting me and I want to fulfill expectations. The fact that we won the game like we did don’t hurt, so we don’t care if it’s preseason. We’re going to build habits right now,” Whiteside said.

Things didn’t come easy at first for the Heat, as they trailed the Nets by as many as 11 points in the second quarter and faced a 59-55 deficit at halftime.

Point guard Goran Dragic also had his best game of the preseason with a double-double effort, which included 17 points, a team-high 11 assists and four boards.

Miami shooting guard Tyler Johnson, who had 14 points and three assists against the Nets, opened up before the game about the thrill of signing his four-year, $50 million contract with the Heat in the offseason.

“There’s just so many different emotions. Of course I was happy, when somebody offers you $50 million of course you’re happy, but it was more so that I just know the journey that it took me to get here. It was a bit overwhelming and I threw up,” Johnson said.

Starting shooting guard Wayne Ellington also had 14 points (4-of-8 shooting from behind the arc) as well as three boards for Miami, while shooting guard Dion Waiters and power forward Derrick Williams had 12 and 10 points respectively on the evening.

Williams, a former second-overall pick of the 2011 NBA Draft, views Miami as the perfect opportunity for him to make an impact.

“I really wanted to find a fit to where I can come in and play. I think that’s every kid’s dream is to make the NBA and to play as many minutes as possible. I feel that this is the right opportunity for myself as well as for the people that are leaving the team like D-Wade (Dwyane Wade), Joe Johnson and Luol Deng. Those are versatile-type players and I really felt that the way I play, being so versatile of a player that I am, was only the right fit for me to come here,” Williams said.

For the Nets, point guard Jeremy Lin led the way for his team with 16 points, five assists and three rebounds, while shooting guard Bojan Bogdanovic came off the bench to score 13 points. Brooklyn starting power forward Justin Hamilton had 12 points and three rebounds, while veteran small forward Luis Scola had a solid game off the bench with 12 points, six boards, three assists and two steals.

Up next, the Heat will travel deep in the heart of Texas to take on the San Antonio Spurs on Friday night at AT&T Center. The contest, which is scheduled to tip off shortly after 8:30 pm ET, will be broadcast live locally on Fox Sports Sun.
[xyz-ihs snippet=”Responsive-ImagenText”]