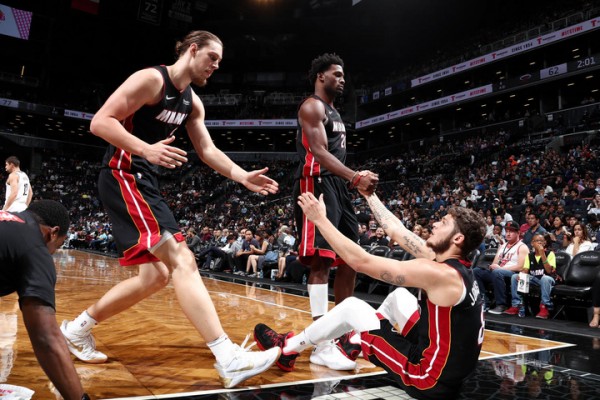 (Brooklyn, NY) – In their second preseason contest of the 2017-18 season, the Miami Heat (1-1) showed clear signs of rust and sloppiness on the road, as they fell 107-88 to the Brooklyn Nets (2-0) on Thursday night at Barclays Center.

The Heat simply could not get anything going on offense from behind the arc, as Miami finished a dismal 4-of-27 from three-point range as a team and was outrebounded by a whopping 62-37 margin.

“I think we started off the game with a defensive mindset,” Nets head coach Kenny Atkinson said after the game. “The goal was to be just more consistent defensively and to do it every quarter.”

On a positive note, the Heat got a monster performance in limited time by star center Hassan Whiteside.

Whiteside, who only played 18 minutes on Thursday night, had 19 points (8-of-12 shooting from the field) to go along with nine rebounds and two blocked shots.

Miami shooting guard Tyler Johnson, who looks to be a strong candidate for NBA Sixth Man of the Year, had another stellar performance off the bench with a game-high 21 points (6-of-12 from the field and a perfect 8-of-8 from the charity stripe) and nine boards of his own.

Heat point guard Goran Dragic, who made one of Miami’s three-point shots, finished with 12 points (5-of-12 shooting) in 24 minutes.

As a team, the Heat played a pretty solid game defensively. Despite Whiteside only being on the court for just 18 minutes, Miami blocked seven shots and forced Brooklyn to turn the ball over 27 times on the night.

“Well, they were playing at a different pace than us and we weren’t able to match that type of energy,” Heat head coach Erik Spoelstra said after the game. “It really looked like we were playing in quicksand, a step behind on virtually everything and we paid the price for that.”

Up next on their preseason slate, the Heat will remain on the road and take on their cross-state rival Orlando Magic at Amway Center on Saturday night. The contest, which will tip off shortly after 7:00 p.m. ET, will be broadcast live locally on Fox Sports Sun and nationally on NBATV.
[xyz-ihs snippet=”Responsive-ImagenText”]