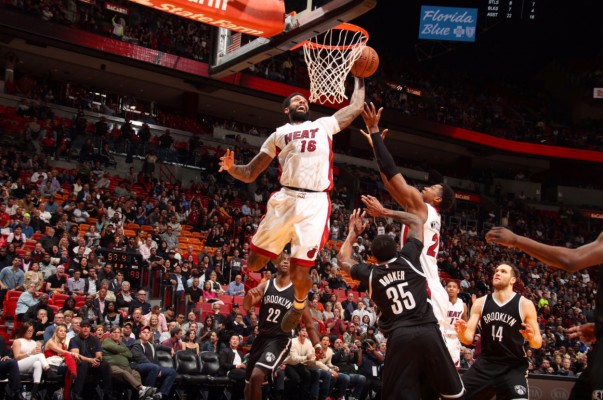 “Well, you do have to credit Brooklyn,” said Heat head coach Erik Spoelstra during his postgame press conference. “They played at a frantic pace. I mean, they really get you on your heels. Whether it’s a miss or a make, they’re coming at you. They’re putting a tremendous amount of pressure on your defense.”

With an eight-game winning streak on the line, the Heat managed to rebound from a seemingly slow start and hold off the Nets in the second half on Monday night.

Heat point guard Goran Dragic was brilliant on the night, going off for a team-high 20 points to go along with eight assists, three steals and three rebounds.

While starting shooting guard Dion Waiters, who continues to score at will, had 19 points of his own to go along with an impressive nine assists and six rebounds.

“We just stayed with it, man. We made plays when we needed to,” Waiters said after the game. “That’s a tough team over there, no matter what their record is. A bunch of young guys going out here and trying to prove something to themselves and everybody else. We can’t look at their record. We’ve got to be consistent on that end, just continue to come out here and get better, ease the game, and most importantly just win.”

The Heat absolutely annihilated the Nets from 3-point range as they shot an efficient 11-of-26 from behind the arc, compared to the Nets’ dismal 4-of-26 effort.

Moreover, power forward James Johnson continued to show his worth by putting together a terrific effort off the bench.

Johnson, who sustained a minor right shoulder stinger towards the end of the game, came off the bench for 17 points, five assists, four rebounds, three blocks and two steals in an all-around gem of a performance.

Rising star center Hassan Whiteside had 12 points, nine boards and three blocked shots on the evening, while guard Rodney McGruder had 13 points and two steals in 32 minutes of action.

“These guys, man, I love these guys,” Whiteside said. “They care about winning. I told you that at the beginning of the season, I go to war with these guys any day. It means a lot to them. Now that they’re healthy, you can see a team coming together.”

For the reeling Nets, shooting guard Bojan Bogdanovic had a team high 16 points (6-of-13 overall from the floor and 1-of-4 from behind the arc) and four rebounds, while center Brook Lopez had 14 points, three rebounds, three assists and two blocks.

Up next, the Heat will host their third contest of a four-game homestand on Wednesday night as they take on their Southeast Division rival Atlanta Hawks (28-20) at American Airlines Arena. The contest, which is scheduled to tip off shortly after 7:30 p.m. ET, will be broadcast live locally on Fox Sports Sun.
[xyz-ihs snippet=”Responsive-ImagenText”]