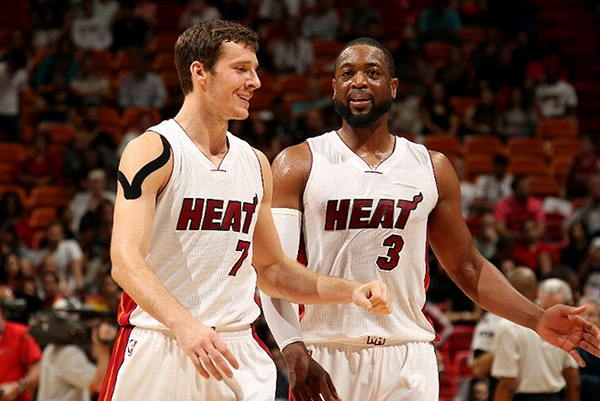 (Miami, FL) – With the help of the Sacramento Kings’ 113-106 win over the Charlotte Hornets on Tuesday night, the Miami Heat (29-35) moved back into eighth place in the Eastern Conference with a 104-98 victory over the Brooklyn Nets (25-38) at American Airlines Arena.

Dwayne Wade, who made history tonight by passing Dolph Schayes for 56th and Mark Aguirre for 55th on the NBA’s All-Time Scoring list, led the way for the Heat with 28 points (10 of 25 from the field) and nine assists on the night.

This was also Wade’s fourth consecutive game with at least 20 points, as the 11-time NBA All-Star continues to play his heart out in Miami’s playoff push.

“I finally got a little rhythm,” said Wade after the game. “It helps having guys out there like Goran. We just communicate a lot and have a good IQ of the game.”

Chris Andersen, who started in place of suspended center Hassan Whiteside, had a night to remember. “Birdman” tied a career high in points with 18, as well as a season-high 14 rebounds (five of them on the offensive end) to conclude the evening.

“Today he had a little extra pep in his step,” said Wade as he praised Andersen’s play.

In his return to the lineup after missing the previous two games with a back injury, Goran Dragic appeared to not miss a step as he contributed 17 points, three assists and two steals. Luol Deng, for the 600th time in his 10-year career in the NBA, scored double figures with 10 points.

“It’s great,” said Dragic. “The teammates are awesome, they’re helping me a lot; the coaching staff and all the fans so I’m feeling pretty well here.”

The Heat continue their dominance against New York teams this season, as they improved to 4-0 over the Nets and are currently 3-0 against the New York Knicks as well. This was a turnaround compared to last year’s regular season against the Nets, where Miami was 0-4 against Brooklyn.

With the loss, the Nets dropped their fifth consecutive game as their playoff hopes took yet another blow. However, this doesn’t mean by any stretch that Brooklyn is going to just throw in the towel on the season.

“You keep fighting until the end,” Brooklyn Nets head coach Lionel Hollins said. “As long as I have breath and as long as I’m coach, I’m going to keep fighting.”

Up next on their schedule, the Heat will head north to take on the Eastern Conference’s fourth seed in the Toronto Raptors (38-26) at Air Canada Centre. The game is slated to tip off on Friday night shortly after 7:30 pm ET.
[xyz-ihs snippet=”Responsive-ImagenText”]