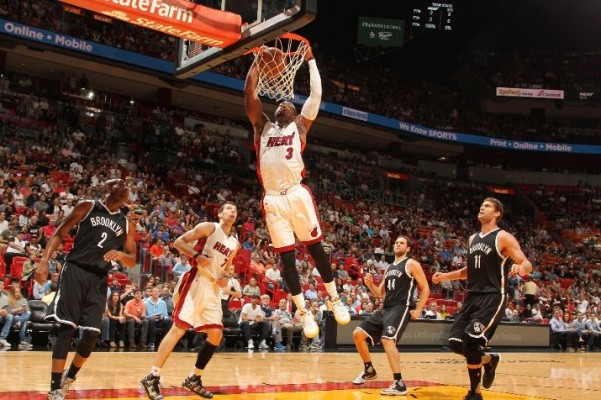 With a 58-44 lead at halftime and a 16-point lead during the third quarter, Miami seemed to be well on their way to a 19th victory on the season. Brooklyn, who came into the game with a dismal 2-12 record on the road and an overall seven-game losing streak to the Heat, put their misfortunes of 2015 behind them to pull off the upset in the second half.

“With all due respect to the Nets, there’s no way we should blow a 15, 16 point lead at the half,” said Heat power forward Chris Bosh. “We just got to take it. Arguing isn’t going to be any help to us.”

2013 NBA All-Star center Brook Lopez and shooting guard Wayne Ellington were superb on Tuesday night, with both players scoring 26 points for the Nets. Lopez led the way for Brooklyn en route to a double-double, as he compiled 26 points, 12 rebounds and two steals, while Ellington (seven three pointers made) came off the bench to score 26 points to go along with seven rebounds and two assists.

“Wayne was huge,” said Nets head coach Lionel Hollins after the game. “When he gets hot like that, we keep scoring.”

For the second straight contest, shooting guard Dwyane Wade (7-of-11 shooting and six assists) and Bosh (5-of-5 from three-point rage, 12 rebounds and three assists) both scored 24 points each. However, this time it was not enough for Miami to come through for a victory.

A stellar game by Heat center Hassan Whiteside went to waste, as the up-and-coming center had 18 points, 11 boards and a whopping five blocks on the night.

“I’m very confident this team can bounce back,” said Wade. “We’re just not figuring out how to win consistently enough together.”

Up next, the Heat will immediately jump on a plane and head west to take on the Memphis Grizzlies (17-16) on Tuesday night at FedExForum. The contest, which is scheduled to tip off shortly after 8:00 pm ET, will be broadcast live locally on Fox Sports Sun.
[xyz-ihs snippet=”Responsive-Ad”]