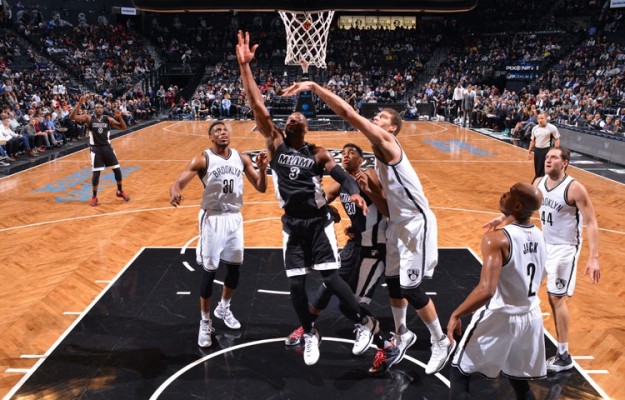 (Brooklyn, NY) – Dwyane Wade’s 28 points, including a pair of clutch baskets in the final two minutes, helped the Miami Heat notch its third consecutive win as they bounced back from a slow start to knock off the Brooklyn Nets, 104-98, on Wednesday night.

The heroics from Wade came despite missing Wednesday morning’s shootaround due to a swollen mouth:

“I wasn’t concerned about playing basketball. I just couldn’t talk,” said Wade. “I couldn’t yell at nobody. So that was a good thing.”

Wade will have the problem looked at on Thursday morning in Miami:

“I really can’t explain it,” said Wade. “I don’t want to gross you guys out with everything that’s going on.”

Determined to bounce back after a poor shooting effort (3-of-16) in Atlanta on Monday night, Wade nailed 13-of-17 of his shots over the course of the game. The effort came after he had spent Tuesday evening in his hotel room looking at his missed shots versus the Hawks:

“I got some good shots in Atlanta that I missed,” said Wade. “I told myself if I get those same shots against Brooklyn, they’re going in.”

Wade’s first clutch basket connected with 1:53 left after Brooklyn ran off six of the previous eight points to slice the margin to six at 99-93. Then, after Jarrett Jack hit a trio of free throws to get within three at 101-98 with 1:01 left, Wade struck again on a floating jumper with 43.5 seconds left to give the Heat just enough of a cushion for the victory.

For the quarter, Wade collected 10 points, and also grabbed a rebound off a missed shot after his final basket. He was aided throughout the evening by a strong performance from Hassan Whiteside, who picked up a double-double with 20 points and 13 rebounds.

Despite the strong performance, Wade was more concerned about the impact the two most recent wins will hopefully have on the team’s chemistry:

“It’s all about team success. We had a great road trip, especially for a young team learning how to win games,” said Wade.

That strong finish was in contrast to Miami’s shaky start that saw Brooklyn move ahead by 10 with less than three minutes left in the opening quarter. However, Miami turned on the switch at that point and began to make its comeback, eventually tying the game at 44. By the time the halftime horn sounded, they held a 55-50 advantage.

Entering the fourth quarter, the Heat had inched the lead up to six at 84-78, but then went scoreless for over four minutes to start the period. The Nets would eventually get within a point at 86-85, but an 11-2 run helped stop Brooklyn’s momentum.

Joining Wade and Whiteside in scoring double figures were the trio of Goran Dragic, Gerald Green and Justise Winslow. Dragic notched 16 points and handed out five assists while continuing to battle through his shooting slump. The point guard connected on 6-of -5 attempts, but still had trouble from long range, making only one of his six treys.

Green added 13, while Winslow tossed in 11 on 4-of-5 from the field, while also contributing on the boards with eight rebounds.

Completing a sweep of their brief two-game road trip, Miami now returns to American Airlines Arena, where they’ll host the Toronto Raptors on Friday night in a game set to tip off just after 8 p.m. ET.
[xyz-ihs snippet=”Responsive-Ad”]