Miami Heat vs. Brooklyn Nets Game Preview: Heat Look to Get Back on Track 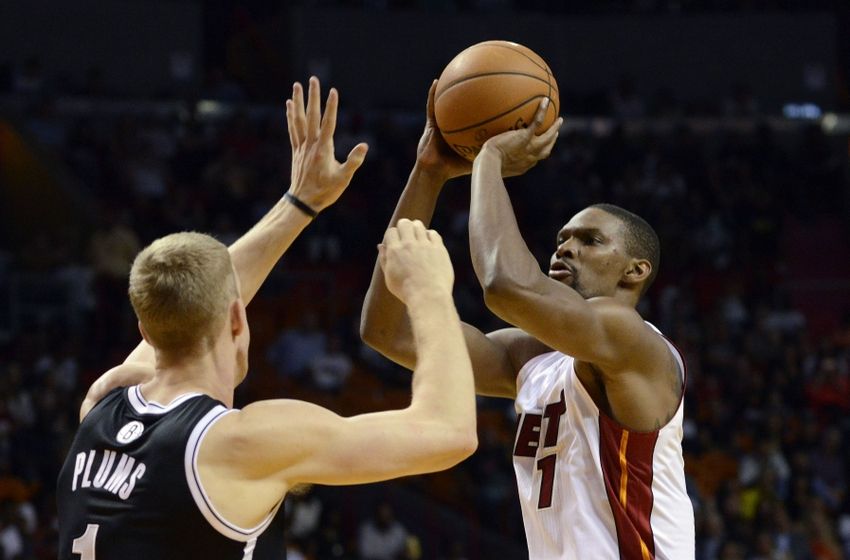 (Brooklyn, NY) — The Miami Heat (5-5) look to end their three-game losing streak when they travel to the Barclays Center to play the Brooklyn Nets (4-5) on Monday night.

The Heat have lost games versus the Indiana Pacers, Atlanta Hawks and Milwaukee Bucks over the last week. In each of those losses, Miami was unable to put forth a complete effort on offense and defense. A lack of offense cost the team their games versus the Pacers and Bucks, while a lackadaisical defensive effort in Atlanta led to an ‘L’ in the loss column.

Over the past two games, the Heat have had to play without Dwyane Wade and it looks like they’ll have to do the same in Brooklyn, as Wade continues to heal his hamstring injury. Wade, Josh McRoberts (foot), Danny Granger (hamstring) and Justin Hamilton (adductor) are all listed as doubtful for Monday night’s game.

Versus the Bucks, the Heat were held to just 84 points on 41 percent shooting. The struggles were also apparent at the free throw line, where Miami converted on just 59 percent of their attempts (13-of-22).

A large reason for the team’s shooting struggles was due to the erratic play of Chris Bosh. The Heat’s go-to option hit just 2-of-17 versus the Bucks, and has shot just 12-for-49 over his last three games.

The Heat will need Bosh to get over the hump in their matchup with the Nets. Brooklyn possesses three capable scorers in Joe Johnson, Deron Williams and Brook Lopez. All three players are averaging at least 16 points per game and shooting at least 47 percent from the field.

Though the Nets have also gone cold in losing their last three games while on their road trip, the team has a knack for beating Miami–Brooklyn swept the season series last year versus the Heat.

However, Miami would get the last laugh as they wound up defeating Brooklyn in the second round of the playoffs, 4-1.

In the Nets’ last game, they were soundly defeated by a Portland Trailblazers team playing without LaMarcus Aldridge and Nicolas Batum. Their absences didn’t seem to mean much, as Brooklyn lost, 97-87. Lopez scored 21 points on 10-of-17 from the field while Kevin Garnett posted a double-double with 12 points and 12 boards.

Lopez attributed the team’s loss to “not being able to finish”:

“At the end of the game we were right there, we got to where we wanted to go, we just didn’t finish.”

A couple of positives from Miami’s loss to Milwaukee on Sunday was the play of Shawne Williams and their two rookies.

Williams continued to take advantage of his opportunity as the team’s starting power forward, as he contributed 13 points, 11 boards and three treys.

Following the loss to Atlanta, Williams answered the question of why he’s been successful so far this season:

“Teammates are just doing a great job of finding me. We try to play together. We try to get a certain amount of assists every day and like coach says, ball finds energy. I just try to keep energy and stay in that corner.”

Both Shabazz Napier and James Ennis had solid efforts in the loss to the Bucks. Napier contributed 10 points and five boards, while James Ennis established a new career-high with nine points.

Facing the Nets might be what helps the team get back to its defensive identity. Brooklyn shot just 39 percent from the field and was a horrid 5.3 percent from beyond the arc, as they missed 18-of-19 3-point attempts in their loss to Portland.

Tipoff is set for 7:30 PM E/T and the game will be broadcast on Sun Sports.
[xyz-ihs snippet=”Responsive-ImagenText”]