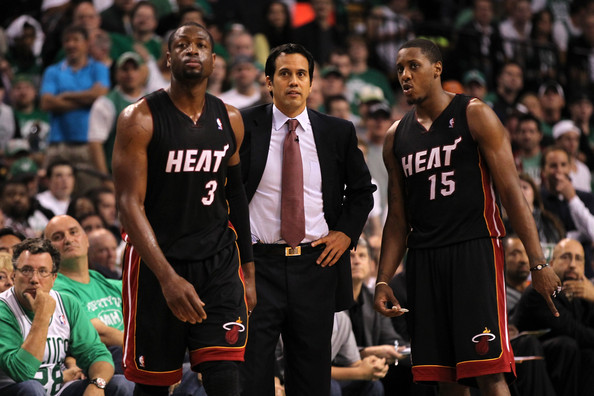 The Heat are coming off a narrow loss to the formidable Washington Wizards at home. It was the team’s first loss this season when they entered the fourth quarter with a lead.

Unfortunately, one critical turnover cost them the win, and Miami was handed their fifth-straight home loss.

Although the Heat couldn’t pull out a win, they played admirably with Dwyane Wade scoring 28 points to go along with eight assists and Luol Deng contributing 19 points and five rebounds. Mario Chalmers and Udonis Haslem scored 14 and 11 points respectively.

Wizards point guard John Wall was impressed by Miami’s performance and gave them credit where it was due:

“They did a good job of not letting me get into the open court. I only made six shots all game. When you are taking the ball out (after Miami field goals), it’s hard to get into a flow.”

The Heat will once again be without their star Chris Bosh on Sunday who has been ruled out with a strained calf.

After Saturday’s practice, Heat coach Erik Spoelstra offered some insight regarding the team’s performance, and how they plan on improving.

“We watched film again this morning. The (Wizards) really competed, and they made some big plays down the stretch. We had opportunities to make plays too, especially in the fourth quarter. We’re building it. Where they really hurt us, when you look back on it, is in transitions off the glass. Those end up being probably the most pivotal plays. The other ones are just great players making great plays, and we were doing the same thing on the other end, but those plays inbetween — ball in the air, ball on the floor, sprinting back, saving a possession that’s not leading to a layup on a fast break — those areas, we need to continue to get better in.”

The Celtics are ranked second in the Atlantic Division, and are coming off a 114-98 win against the Minnesota Timberwolves, the worst team in the Western Conference.

Kelly Olynyk led the team with 21 points, and was one of six Celtics who scored in double digits. It was the first game the team played without their star point guard, Rajon Rondo, who was traded to the Dallas Mavericks earlier this week for Jameer Nelson, Brandan Wright, Jae Crowder, and two draft picks.

Rookie Marcus Smart is most likely going to take Rondo’s role as starting point guard. This is great news for Miami, who will be in good company playing against a team with little experience together on the court. Boston’s president of basketball operations Danny Ainge embraces the new-look Celtics, and is in no hurry to pass judgment on their performance as a team.

“Let’s take a deep breath and enjoy the holidays and let’s let these (new) guys play, see how everybody fits in.”

Miami has won five of their last seven home games against the Celtics and are trying to avoid their sixth-straight loss at American Airlines Arena, which would be their worst home-losing streak since their seven-game slide in 2008.

Wade, who is averaging 28.8 points since becoming ill before the Heat’s game against the Utah Jazz, has been held to just 15.8 points per game and 39.7 percent shooting in his last five showings against Boston.

“We all want to win now,” said D3 after the team’s loss to the Wizards. “It sucks from that standpoint, but we’ll keep coming in, keep trying to find a way to get better.”