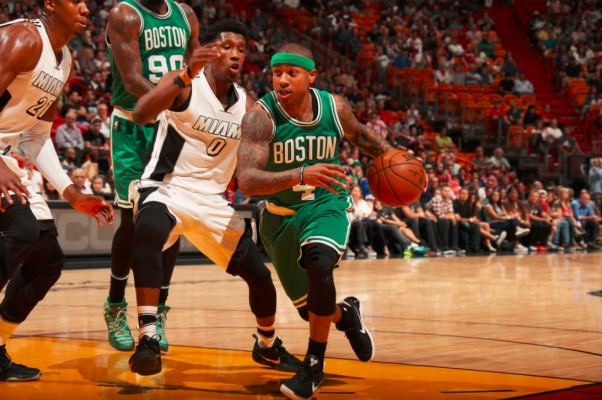 (Miami, FL) – Despite a spirited comeback in the final minutes, falling into a huge first-half hole was too much to overcome for the Miami Heat as it dropped its second straight-contest in losing to the Boston Celtics, 105-95, at American Airlines Arena on Sunday night.

Miami trailed 97-85 with 3:31 left in the game and ran off eight unanswered points to chop its deficit to four with 1:48 remaining. However, Boston then put the game away by scoring eight of the final 10 points. Two more points might have been added at the start of the Heat run after the Celtics’s Isaiah Thomas was ejected for a flagrant foul for using his elbow with 3:02 to go, but Justise Winslow missed on both of his free-throw attempts.

“It wasn’t excessive. He didn’t mean to hurt me,” Winslow said. “It was a basketball play, heat of the moment. Some of it carried over from last year, the last game of the season to this year.”

Falling behind by as many as 24 during the first half turned out to be devastating for Miami, which did manage to keep chipping away until it was a seven-point game with one quarter left. The loss dropped its record to 9-19 on the year.

“You have to credit them (Boston) first of all. They’re a good basketball team. They put you in a lot of situations defensively that are sometimes awkward or different than what you’re facing normally,” Heat head coach Erik Spoelstra said. “Tonight, what hurt us was that every time we had an opportunity, we coughed it up. Right when the momentum would shift, we’d have an ill-advised turnover. This is one of our most inefficient games of the year.”

Goran Dragic and Hassan Whiteside provided the bulk of the Miami offense, combining for 54 points on the night. Dragic closed out the contest with a game-high 31 points, adding seven assists and five rebounds and connecting five times from long-range. Meanwhile, Whiteside had another monster double-double with 23 points and 17 rebounds, adding three blocked shots.

“We can’t say in the first two quarters, ‘OK, we’re going to feel the game and not going to battle,'” Dragic said. “We can’t win like that, we’re not talented enough to do that. We need to grind those games to win these types of games.”

Miami held some early leads, including an 8-5 advantage. However, from that point, Boston took total control of the game as it put together a 40-13 run that blew the contest open. That gave the Celtics a 45-21 advantage, with the Heat spending the rest of the game trying to catch up from that cavernous deficit.

Defensive woes and turnovers were the key drivers in helping Boston open up such a huge lead. The Celtics shot 57 percent from the field in the first half, including 65 percent during the first quarter. For the Heat, its 53 percent field-goal shooting during the opening two quarters was negated by its 13 turnovers.

“There’s things we could have done better, but they made some shots in that first quarter. They were making some that were contested,” Spoelstra said. “Then, our spirit was hit a little bit after they got up by double digits.”

Trailing 58-41 at the break, Miami clamped down on its defense to whittle the margin to just seven at 77-70 by the end of the third period. It held Boston to just 24 percent shooting from the field during the quarter and began to find its stroke from long-range, connecting on 4-of-7 from beyond the 3-point line.

“We came back in the third quarter and played really good defense,” Dragic said. “We had a lot of opportunities to score. We played good basketball on both ends of the court, but that’s not enough. You need to play 48 minutes.”

Unfortunately, until its late push, the Heat was unable to get any closer as the Celtics were able to improve their fourth-quarter shooting just enough to hold off the late charge. An inability to stem the tide of turnovers wound up biting the Heat, which finished with 23 on the night.

“After their explosive start, we settled in and played a lot harder, competed,” Spoelstra said. “We got a little more to our game, except for the turnovers. The turnovers really had us sideways. So many of the unforced turnovers hurt us, especially at the key times when they happened.”

Miami will once again be at home on Tuesday night, when it hosts the Orlando Magic in a game that will tip off shortly after 7:30 p.m. ET. That will be the fifth of six games at American Airlines Arena, with Thursday’s clash against the Los Angeles Lakers highlighted by the retirement of Heat legend Shaquille O’Neal‘s number.
[xyz-ihs snippet=”Responsive-ImagenText”]