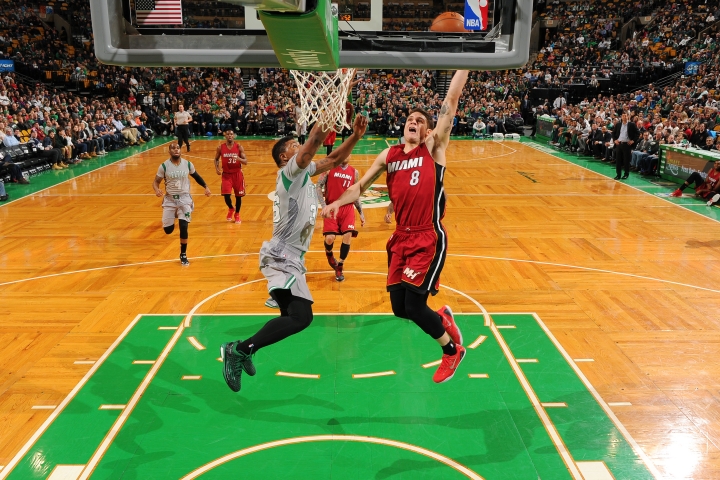 Despite another lackluster third quarter in which Boston outscored Miami, 28-17, the Heat were led to victory by strong performances from the defense, and young players such as Hassan Whiteside and Tyler Johnson.

Whiteside posted 20 points, nine rebounds and three blocks in the victory. The key story of the game however, was the play of Johnson—in just his third career NBA game, the shooting guard scored 13 points, led the team with nine boards and blocked two shots. The 22-year-old scored nine points in the key fourth quarter, when Miami pulled away from Boston.

Johnson commented on what coach Erik Spoelstra told him entering the game:

“He just said be aggressive. The time for development as far as just sitting there and watching is over because of the situation we have with Dwyane and Luol being out. He said everyone is gonna be a part of what he called the ‘circle in the wagon.’ Everybody is ready and everybody is ready to make an impact when their number is called.”

The Heat once again played without Dwyane Wade (hamstring) and Luol Deng (calf) for the second consecutive game. Shabazz Napier started at point guard, while Danny Granger started at the small forward position.

The Celtics were held to just 37 percent shooting as a team. Tyler Zeller and Avery Bradley led the team with 17 points apiece, while the team’s leading scorer, Jared Sullinger, was held to just seven points on 3-of-11 from the field.

While Boston went on a 20-9 run in the first eight minutes of the third quarter to cut the Heat’s lead to 53-51, Boston was unable to sustain their offensive momentum for the entirety of the game. The Celtics scored 28 points in the third period, but couldn’t score any more than 16 points in each of the other three quarters.

Boston was able to keep the deficit to single digits for the last seven-and-a-half minutes of the game, even trimming Miami’s lead to 80-74 with 1:31 remaining after a Zeller free throw, but that would be the closest they would get late in the fourth quarter.

“Well, they get their opportunities. They’ve been really dedicated to their player development but then with the way the season is going, now you have to play. You’re expected to produce and now you have to do it when there is duress and pressure of the third quarter which we’ve been facing, and I love to see the young guys respond to that. They were fearless tonight.”

Johnson was asked by Sun Sports’ Jason Jackson on how he feels about the fans’ desire to see him play more minutes now that he’s on the active roster:

“Obviously I get a lot of support from a lot of the fans. It’s awesome when you come in somewhere and you’re welcomed right away. All I can do is play as hard as I can and keep the fans happy.”

The Heat will travel to the Palace of Auburn Hills to play the Detroit Pistons on Tuesday night. Tip-off is set for 7:30 pm EST and the game will be broadcast on Sun Sports. The Pistons are currently three-and-a-half games behind the Heat for the seventh-best record in the East.
[xyz-ihs snippet=”Responsive-Ad”]