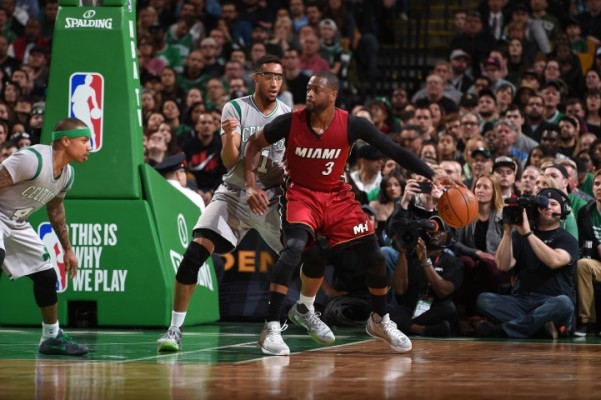 (Boston, MA) — It’s only fitting that the battle for home-court advantage in the first round of the playoffs came down to the last day of the NBA regular season and the final showdown between these two Eastern Conference foes.

For the Miami Heat, a win would’ve guaranteed them the three seed and give them the Southeast Division title. For the Boston Celtics a win, plus an Atlanta Hawks victory in Washington would have given them the fourth seed and the coveted home-court advantage that teams fight so hard for all season long.

As it goes in sports, only one team could come out on top, and that team was the Celtics, as they beat the Heat 98-88 on Wednesday night.

It was a true playoff atmosphere at the tip Wednesday night, but once things got going, the Boston crowd fell quiet. Miami had lost each of its previous two matchups against Boston this year, and knew they needed this one badly.

“We’re a desperate team at this point. We know what’s at stake. We’ve got to treat it like a Game 7,” Miami’s Joe Johnson said before the game.

A Game 7 is exactly how they treated it at the start. The Heat brought a razor-sharp focus in quarter one. For a time, it was a three-man show for Miami as Hassan Whiteside notched two blocks in the first three minutes followed by quick scores on the other end by Goran Dragic and Luol Deng. Then, Dwyane Wade and Johnson got involved and the Heat looked like an all-out juggernaut. They built a 22-point lead in the first 12 minutes.

In the second quarter, Boston found a bit of rhythm on offense, but still, there was nothing they could do to stop Miami on the other end. By halftime, the Heat led 62-38.

In the second half, the Heat went ice cold and the Celtics seemed to be flying. Within three minutes, Boston cut the lead to 12. Heat coach Erik Spoelstra had to burn two quick timeouts to slow the charge. It didn’t help. Midway through the third, Celtics guard Isaiah Thomas led his team on a 20-0 scoring run to bring the Celtics to within four.

“None of us felt good about how we played in the first half. There’s a lot of guys that hung banners around here that deserve better so I thought we played the right way in the third quarter,” Celtics coach Brad Stevens said.

At the end of the third, things got chippy as exchanged words between Dragic and Celtics guard Marcus Smart turned into a bench-clearing scuffle on the court.

The playoff atmosphere had officially returned.

In the final quarter, Boston erased their earlier 26-point deficit and simply took the game over as they eventually built a double-digit lead of their own.

“You have to give a great deal of credit to Boston. They really stepped up the pressure, our offense got flattened out. We were playing in mud. What we were doing against the pressure was not sharp,” said Spoelstra after the game.

Toward the end of the game, the Eastern Conference playoff picture became clear as the Hawks lost to the Wizards in Washington and the three through six seeds moved into a four-way tie. That result means that the Heat will still maintain the three seed along with home-court advantage against the sixth-seeded Charlotte Hornets in the first round.

“You have to be able to compartmentalize right now,” Spoelstra continued. “The reality is, you don’t get it by default. You earn it during the regular season by winning the games that you need to in a very close race.”

Miami will begin their playoff series with Charlotte, who they split the season series with 2-2, this weekend.
[xyz-ihs snippet=”Responsive-Ad”]