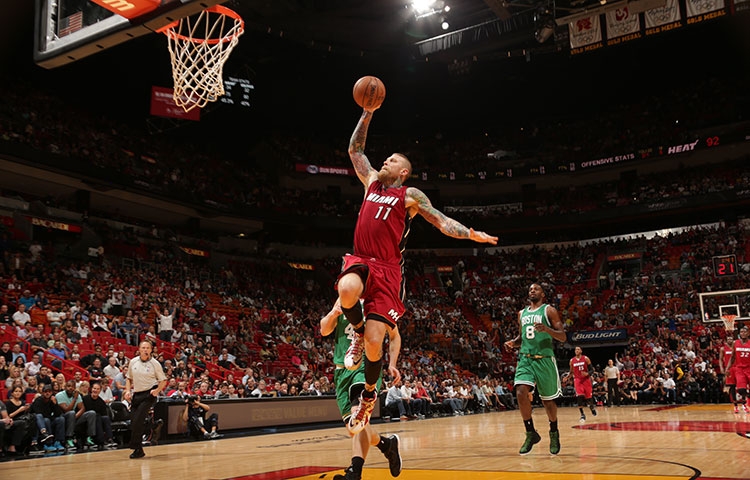 It looked to be a tough night for the Heat at American Airlines Arena. The team, who was already without key players Chris Bosh and Josh McRoberts, received a shocking announcement shortly before tipoff that Dwyane Wade and Hassan Whiteside would not be joining them on the court. It was the first time in 154 games that the Heat would be without any member of the iconic “Big Three.”

Luckily the Heat stayed determined and were able to not only pull out a win, but their second biggest win of the season.

Heat coach Erik Spoelstra noticed a turnaround in the team’s attitude following the announcement that they would be without even more teammates.

“Sometimes when you go through adversity, you get to a point where it just makes you connect a little bit more, and that’s what we’re starting to feel here in the last two games. When we announced that Wade and Hassan would be out, it wasn’t like ‘Oh boy here we go again.’ It was like ‘Hey, let’s come up, let’s go put together a great effort’ and that mentality is probably more encouraging than anything else, but whoever played had a positive impact.”

It certainly was a team effort on the court in Miami. Six Heat players scored in double digits. The Heat are 4-0 when Luol Deng scores at least 20 points, and tonight was no exception.

Deng led the team with 23 points and three boards, proving that he can provide for the team in the absence of their backbone players.

Rookie James Ennis was right behind with a career high 16 points, scoring 10 of 16 in the fourth quarter to go along with eight rebounds. Norris Cole had 15 points, and Shawne Williams and Mario Chalmers scored 11 points apiece with the latter contributing 10 assists to the effort.

Center Justin Hamilton experienced brutal headaches during the first half of the game and was unable to play during the second.

After scoring the first bucket of the night, the Celtics fell behind early in the first quarter, and never regained the lead at any point during the game. Miami’s defense held the Celtics to just 39.8% shooting, and ran circles around the team, who looked dilapidated and confused without superstar Rajon Rondo to lead the way.

The Celtics showcased their three new players, Jameer Nelson, Brandan Wright, and Jae Crowder, who they received in exchange for Rondo, who was traded to the Dallas Mavericks last week.

“They were flying off everything,” said Celtics coach Brad Stevens. “Sometimes when you’re missing your go-to guy, like they were with Wade and Bosh, the other guys are flying all over the place, and I think we got hit by that, but they just played a really good style of basketball.”

Tyler Zeller scored 22 points for Boston and Kelly Olynyk and Jeff Green both had 13.  The Celtics managed to get within eight points of the Heat during the fourth quarter and looked to make a comeback, but Ennis demolished that hope with a three pointer.

It may be a turning point for the Heat, who are finally performing at the level expected from their fan base. With only ten eligible players, and no Bosh or Wade, the Heat proved that they are, indeed, a talented team.

“This is what it is, this is what our season is,” said Spo after the game. “Let’s focus on the guys that are available and not feel sorry for ourselves. We can build connection from that. Doesn’t mean it’s going to be easy, doesn’t mean it’s going to go smoothly but I like seeing that our guys are coming together in communication and connection. That’s more powerful than any schematics.”