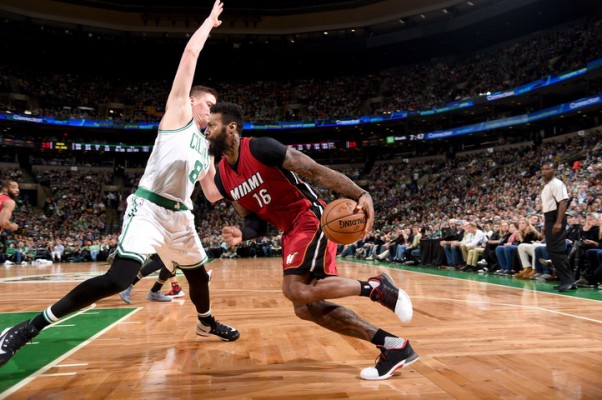 Heat star center Hassan Whiteside, who finished with 19 points and 15 rebounds in 30 minutes of action, made a critical defensive mistake in the final minute of the game.

With 20.6 seconds left in the fourth quarter and Miami trailing 109-106, Boston point guard Marcus Smart appeared to miss the second of his two free-throw attempts. Upon further video review by officials, Whiteside had grabbed the rebound while the ball was still in contact with the outside of the rim, which turned out to be a defensive goaltending violation.

“We let them get to the free-throw line too much down the stretch instead of keeping them in the halfcourt,” Whiteside said. “It’s tough, man. It’s tough rebounding and tough to do a lot. I try to give everything I possibly can do for the team.”

As a result, instead of a one possession game, the Heat had faced a 110-106 hole that they were unable to get themselves out of.

“That’s the competition. This is a very good team down there. We got down by 10, but there’s a lot of ebb and flows in basketball games,” Heat head coach Erik Spoelstra said after the game. “They made big plays down the stretch.”

The Celtics swept the Heat in their four-game regular-season series with the victory on Sunday night, the first time Boston has accomplished this feat since the 2007-08 season.

Boston two-time All-Star point guard Isaiah Thomas, who entered the game as the NBA’s third-leading scorer at 29.1 points per game, gave the Miami defense fits all night as he went off for a game-high 30 points and three assists.

Celtics small forward Jae Crowder, who scored a season-high 25 points and nabbed six rebounds, hit two clutch free throws down the stretch to give the Celtics a four-point win.

“I know that he was really good, and the stats confirm that,” Celtics head coach Brad Stevens said of Crowder’s performance.

Heat shooting guard Tyler Johnson led the team in scoring with 24 points off the bench, while power forward James Johnson had 20 points and six assists.

As a team, the Heat struggled from behind the arc for the second straight game, going only 7-of-29 from three-point range on Sunday night.

Miami, which is still the eighth seed in the Eastern Conference playoff race, is now just half a game ahead of the Chicago Bulls in the standings.

With only nine games remaining in the regular season, the Heat will remain on the road to play the Detroit Pistons (34-39) on Tuesday night in a must-win game. The contest, which is scheduled to tip off shortly after 7:30 p.m. ET at The Palace of Auburn Hills, will be broadcast live locally on Fox Sports Sun.
[xyz-ihs snippet=”Responsive-ImagenText”]