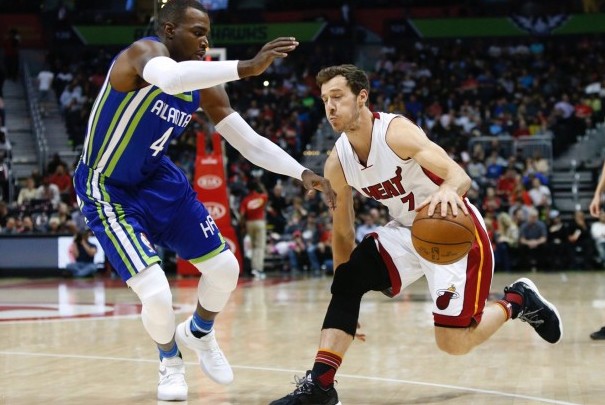 The victory was the Heat’s 15th win in their last 17 games, continuing their remarkable season turnaround after they had started with a dismal 11-30 record.

“We came in here with the right approach to play to our identity, regardless of who’s in and who’s not.” Heat head coach Erik Spoelstra said after the impressive victory. “The physicality was there and the guys enjoyed the way the ball was moving. Everybody felt involved and now we have to just got to get out of here. It’s a late game, and now we have to get ready for a big one tomorrow.”

Heat shooting guard Tyler Johnson put forth a phenomenal effort off the bench, going off for a game-high 23 points (9-of-11 shots made from the field) to go along with five assists and five rebounds in just 26 minutes of action.

Johnson was just one of seven Heat players to score in double figures, backed up by the red-hot tandem of point guard Goran Dragic (17 points and six assists) and shooting guard Dion Waiters (14 points and 10 assists).

Although he had a pretty poor game offensively, star center Hassan Whiteside was a force on the defensive end. Despite going only 1-of-9 from the field for just two points, Whiteside tied a team-high with 10 rebounds to go along with two steals and two of Miami’s 30 assists.

“You can tell they really scouted me in the paint,” Whiteside said. “It was a day for three-point shooting. Them guys knocked down threes and we ran away with it.”

As a team, Miami made a season-high 17-of-37 shots from the three-point line compared to Atlanta’s mediocre 6-of-20 from behind the arc.

Backup center Willie Reed, who finished with his fourth double-double this season en route to 12 points and 10 rebounds, was all smiles after the game.

“Just making sure that I bring energy to the floor when I come out there,” Reed said. “I think it was just the fact that we wanted to keep continuously building on what we had before the All-Star break.”

For the Hawks, who were without the services of point guard Dennis Schröder due to his one-game suspension, looked flat for most of the night.

Atlanta power forward Paul Millsap, who recently made his fourth consecutive appearance in the 2017 NBA All-Star Game, finished with a team-high 21 points and four rebounds. Shooting guard Tim Hardaway Jr. and small forward Kent Bazemore, who were the only other Hawks players to score in double figures, racked up 11 and 10 points, respectively.

Up next, the Heat will head back home on Saturday night to take on the Indiana Pacers (30-28) at American Airlines Arena. The contest, which is scheduled to tip off shortly after 8:00 p.m. ET, will be broadcast live locally on Fox Sports Sun.
[xyz-ihs snippet=”Responsive-ImagenText”]