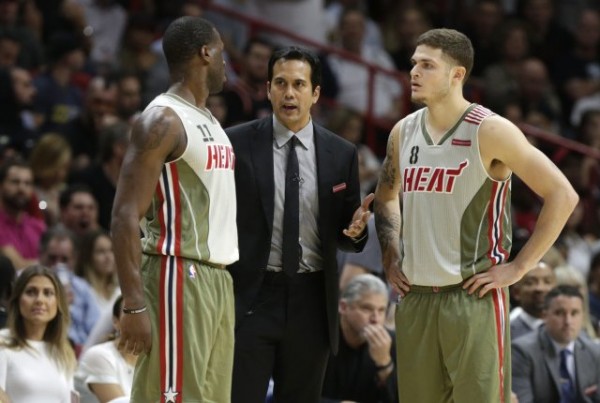 (Miami, FL) – In what continues to be quite a rough start to their season, the Miami Heat (2-8) lost yet another close game to the red-hot Atlanta Hawks (8-2) by a score of 93-90 at AmericanAirlines Arena on Tuesday night.

Heat head coach Erik Spoelstra, who was without two of his starters in point guard Goran Dragic (sprained left ankle) and small forward Justise Winslow (sore left wrist), said he wants to focus on the positives and keep improving the team’s mental toughness after Miami had a season-high 23 turnovers in the game.

“We’ve gone toe-to-toe two nights in a row to basically the end, and this is where you just have to have great mental resolve to stay the course here,” Spoelstra said after the game. “We’re seeing progress, it’s not perfect basketball, but we’re actually developing some collective toughness and grit right now. Just keep on building those habits so that eventually you’ll get your breakthrough.”

The monster effort of Heat center Hassan Whiteside kept Miami in the contest throughout, as the big man had the most rebounds in a single game so far in the NBA this season with an eye-opening 25 boards, 19 points, two assists, two steals and one blocked shot.

“It makes no sense to get down on ourselves,” said Whiteside. “It ain’t like we’re getting blown out. We’re still a top-five defensive team. We’re just trying to get the offense there and we’re going to get it right. I believe in these guys, they believe in me and we believe in coach (Spoelstra).”

Hawks starting point guard Dennis Schroder, who had a team high-18 points and four assists on the night, put his team up 93-90 after hitting two clutch free throws with 5.9 seconds remaining in regulation.

As time expired, Heat shooting guard Dion Waiters (11 points on 5-of-18 shooting from the field, three steals and two assists) was unable to knock down the potential game-tying 3-pointer as Miami lost their sixth straight game to one of the NBA’s best teams.

“I feel like we kind of know who we are even though we’ve added some new faces and made a few changes,” said Hawks head coach Mike Budenholzer after the game.

Power forward Mike Muscala scored 14 points (6-of-7 from the field) off the bench for the Hawks to go along with his five rebounds and four assists, while small forward Kent Bazemore added 12 points, three boards, two steals and two blocks of his own on the night.

Newly-acquired Atlanta center Dwight Howard, who left the game during the third quarter with a bruised left thigh, tacked on a double-double with 11 points, 11 rebounds and three steals.

For Miami, guard Josh Richardson had a great game across the board as he tied a team-high in scoring with 19 points to go along with four rebounds, three blocks, two assists and two steals. Guard Tyler Johnson had 14 points, while forward James Johnson added 13 points (3-of-5 3-pointers made).

Up next, the Heat will try to stop the recent bleeding at home against the Milwaukee Bucks (5-4) on Thursday night at AmericanAirlines Arena. The contest, which will tip off shortly after 7:30 p.m. ET, will be broadcast live locally on Fox Sports Sun.
[xyz-ihs snippet=”Responsive-ImagenText”]