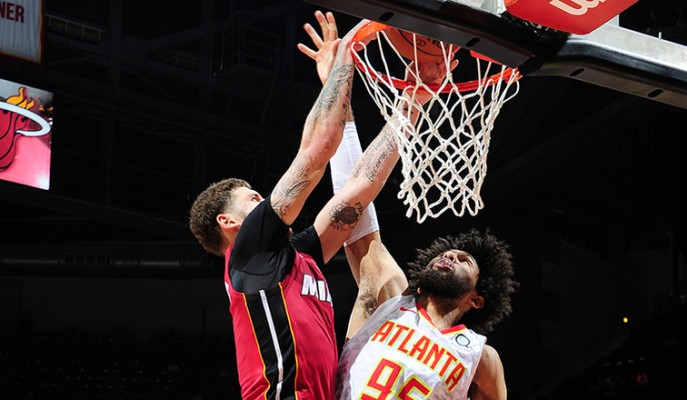 (Atlanta, GA) – The Miami Heat went into Monday’s game against the Atlanta Hawks without some of their most impactful players. Not only were they missing Hassan Whiteside, Justise Winslow, and James Johnson to injury, but point guard Goran Dragic was a late scratch as well after suffering a left elbow injury in Saturday’s game against the Los Angeles Clippers.

The depleted Miami lineup put up a valiant effort to try and steal the victory from the Hawks, but in the end it could not overcome turnovers or fatigue on its way to a 110-104 defeat.

“You have to credit Atlanta, they played good basketball and were really aggressive all game long,” Heat head coach Erik Spoelstra said. “Those last nine minutes, it would require that kind of effort, that kind of disposition. It didn’t even mean every possession was going perfectly, but you could see the level of urgency go way up. That’s what is required and we just didn’t have it for the entire game.”

Despite being down by double digits for much of the second half, the Heat were still hanging around with just under six minutes left in the game. The Hawks controlled the momentum for much of the contest, but when Tyler Johnson brought the deficit to just eight points with an emphatic dunk, it was clear that Miami was not going to go down without a fight.

“Just a little better communication,” Johnson said of how to avoid the need for a late-game comeback attempt. “The breakdowns were on things that we drill almost everyday. I think we can’t turn and blame fatigue for some of those miscues, but it’s not anything that we were just caught off guard. It was just guys not getting to their spots early enough and then not communicating just for a stretch that was long enough for them to kind of take control of the game there in that third.”

Miami’s defense clamped down on the following Hawks possession, allowing Josh Richardson, who had another strong performance with 26 points, four rebounds, three assists, and three steals, find his way to the basket and cut the deficit down to six points at 98-92.

The Hawks kept looking for a crucial score to extend their dwindling lead, but when Kent Bazemore missed a 21-foot jumper, Bam Adebayo came down with a vicious defensive rebound before dishing the ball to Dion Waiters, who converted for two points on the other end.

Despite the flurry of big plays, the Heat were still down, 98-94, and on the following Hawks offensive possession, Bazemore made up for his missed jumper on the previous possession and got inside for an easy layup. The Heat refused to go away, though, and after Adebayo, Wayne Ellington and Waiters managed to get to the free-throw line on consecutive possessions, they brought the contest to just a one-score game at 102-99.

When Richardson hit a jumper with just over a minute in the game to cut the deficit to one point, it really seemed as though Miami was going to get out of Atlanta with a win. Unfortunately, the Hawks hit two huge shots when it counted and after a devastating turnover by Ellington (which gave Miami 19 turnovers on the night), the game was all but over.

“I think we were playing hard. I think we missed some assignments late and they were definitely making us pay for it,” Richardson said before commenting on his evolution as a go-to guy on the offensive side. “I don’t mind it. I’m a guy that can do a lot of things on the court so whatever the team needs I think I can step in and do it. If scoring is what we need then I’m gonna do that.”

Despite the loss, the Heat’s performance was an impressive one simply because they were able to nearly overcome the absence of their four missing impact players. Richardson undeniably led the team throughout the game, playing a season-high 41 minutes, but he wasn’t the only Miami player who picked up the slack.

Waiters put in one of the better performances of his up-and-down season, finishing the night with 23 points on 9-of-17 shooting. Tyler Johnson had 19 points, three rebounds, two assist, and two steals. Adebayo added physicality on both sides of the court on his way to a double-double with 11 points and 10 rebounds. Though Jordan Mickey hadn’t played 20 minutes total before Dec. 15, he was on the court for 24 minutes in Monday’s game and finished with nine points and 10 rebounds.

Monday night’s loss was a tough one to swallow. If any of the Heat’s four injured players had been able to go, Miami would have likely been able to secure the win. In the end, however, the nine-player rotation was just too thin to overcome the demands of an NBA game.

With the loss, Miami moves back to .500 on the season with a 15-15 record. It will look to get several of its injured players back before Wednesday’s game if it hopes to have any chance against the high-powered Boston Celtics squad.
[xyz-ihs snippet=”HN-300×250-TextnImage”]