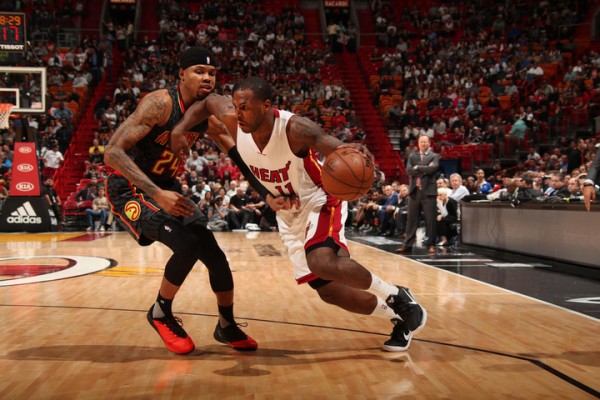 (Miami, FL) – The Miami Heat (20-30) added on to the NBA’s longest active winning streak as they won their ninth straight game on Wednesday night, routing the Atlanta Hawks (28-21) by a score of 116-93 at American Airlines Arena.

“We’ve been able to develop habits, establish our standards and just keep on moving forward day after day,” said Heat head coach Erik Spoelstra during his postgame press conference. “We had a pretty good day yesterday on a day off and not thinking about the win before, but just preparing for a game against a quality opponent that had been playing extremely well.”

After the Heat had found themselves in a very early 7-2 deficit to the Hawks, they went on an 11-0 run and never surrendered the lead again for the rest of the night.

Heat point guard Goran Dragic had himself another superb game as he went off for a game-high 27 points (8-of-13 from the field, 7-of-9 from the free throw line and 4-of-5 from behind the arc), five assists and five rebounds. Over Miami’s nine-game winning streak, Dragic is averaging 23.3 points per game.

“We just got better. We put a lot of hard work in and we’re playing together as a team. We know what we need to do on defense and on offense and tonight, we feel like we opened the game really well, especially defensively, to create a big lead for us,” Dragic said after Wednesday’s victory.

The duo of Dragic and surging Heat shooting guard Dion Waiters continues to be a thing of beauty, as the starting backcourt combined for 47 of Miami’s 116 points against a Hawks team that had won 13 of its last 17 games coming into tonight’s contest.

Waiters, who made stellar plays throughout the night both offensively and defensively, finished with 20 points (9-of-15 from the floor and 2-of-4 from three-point range), seven rebounds, three assists, two steals and two blocked shots.

“He’s got exceptional confidence,” Spoelstra said of Waiters. “If we can bottle it, funnel it and drive it in the right way, that’s a powerful thing. He’s meeting us more than halfway. You can see his versatility and you can see just the skill level that he has.”

Heat rising star center Hassan Whiteside had yet another double-double in 30 minutes of action, going off for 18 points (8-of-13 from the field), a whopping 18 rebounds and two blocked shots. Shooting guard Tyler Johnson, who played in only his second game back since returning from a five-game absence due to a shoulder injury, scored in double figures off the bench with 11 points in 32 minutes.

“We know we was coming out here and playing a really hot and talented Atlanta Hawks team,” Whiteside said after the game. “We knew we had to play a full 48-minute game in order to get the win.”

With 5:52 remaining in the fourth quarter, Whiteside was fouled hard on the offensive end as he was pulled down from behind by Hawks rookie Taurean Prince. After the play, a brief scuffle with Prince and Heat forward James Johnson (16 points, three blocks and three assists) ensued as Johnson shoved Prince, which resulted in both players being ejected from the game.

“It was unfortunate that it turned into that, but they hard-fouled him unnecessarily it looked like,” Spoelstra said about Prince’s foul on Whiteside. “I still haven’t seen a replay, but I thought he responded great. He cooled himself off.”

On a night where very little went right for their team, the Hawks had only three players score in double figures. Small forward Kent Bazemore led all Hawks scorers with 14 points and two steals, while point guard Dennis Schroder and shooting guard Tim Hardaway, Jr. had 12 and 10 points, respectively.

In search of their tenth consecutive victory, the Heat will host their fourth and final contest of a four-game homestand on Saturday night when they take on the Philadelphia 76ers (18-30) at American Airlines Arena. The contest, which is scheduled to tip off shortly after 7:30 p.m. ET, will be broadcast live locally on Fox Sports Sun.
[xyz-ihs snippet=”Responsive-ImagenText”]