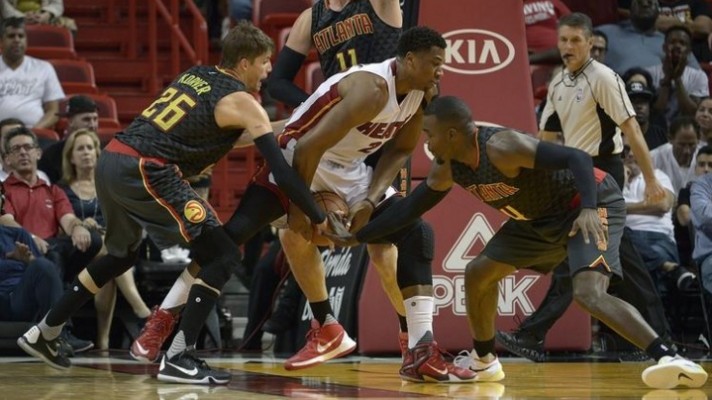 (Miami, FL) – A fourth quarter comeback by the Miami Heat came up short as the Atlanta Hawks extended their winning streak to seven over Miami with a 98-92 victory on Tuesday night at American Airlines Arena.

At the start of the fourth quarter, the Heat trailed by 1, but ran off the first 10 points to make it 79-75 with just over eight minutes remaining. However, Atlanta answered with a pair of threes to blunt the surge.

Then, with less than five minutes to go, Miami had a chance to reduce their five-point deficit, but rookie Justise Winslow stepped out of bounds and the Hawks scored eight of the next ten points to put the game away.

What helped put the Heat in that hole was a disastrous start to the second quarter, where they missed 11 of their first 12 shots. That allowed Atlanta to turn a tight 25-24 lead into a 41-26 advantage.

Miami head coach Erik Spoelstra spoke about the defeat after the game:

“Even though they were in control — double digits — for good parts of this game it was still probably decided by a handful of 50-50 loose balls, ball in the air, ball on the floor, possession plays and a handful of one more opportunities to move it onto a better shot,” said Spoelstra. “You do have to give them credit into forcing us into some tough possessions — their activity level. We’ll learn from that.”

The loss spoiled a strong performance by center Hassan Whiteside, who collected a double-double with 23 points and four rebounds. In addition, Whiteside was nearly perfect from outside, connecting on all but one of his 12 shots on the night. The 26-year-old center also contributed four blocked shots.

Joining Whiteside in double figures for scoring were Dwyane Wade and Goran Dragic, who tallied 21 and 19 points respectively. Chris Bosh nearly joined Whiteside in the double-double category with nine points and 14 rebounds.

Whiteside’s growing stature in the league has taught him to try and build on that development, which he noted in postgame comments:

Wade’s contributions came despite missing a good portion of the second half after suffering symptoms of a migraine headache. He indicated that he started seeing spots while shooting free throws, resulting in his first miss at the line for the season.

He left the game with 5:23 left in the third quarter, complaining of head and neck pain on his left side and was replaced by Josh McRoberts.

Wade was asked afterwards about leaving the game due to the migraine and what steps he’s taking to address the issue:

“It sucks. When we cut it to six, I would have loved to have been in there,” said Wade. “My house is like a dungeon when I wake up. I just hope this doesn’t linger”

Despite those setbacks, he achieved another milestone in his storied career during the second quarter, when he followed up a Dragic miss with his 1,000th dunk in the NBA.

The main area where Miami struggled all evening came from beyond the three-point circle, where they connected on just five of 28 attempts. Neither half had any redeeming value when it came to this category, with just two of 13 attempts made in the first half, followed by a three of 15 effort after the break.

The Hawks were able to block off passing lanes for the Heat, while showing good ball movement on their side of the court, finishing the night with 25 assists.

Earlier in the day, rumors about Mario Chalmers being dealt to the Memphis Grizzlies popped up. When asked after the game about them, Chalmers indicated that nobody in the organization told him anything was in the works, but was philosophical about the possibility of a trade happening:

“It goes how it goes,” Chalmers said. “It’s the nature of the business.”

The Heat, now sporting a 2-2 record on the year, will travel to Minnesota for a Thursday night matchup against the Timberwolves in a contest that will get underway just after 8 p.m. ET.
[xyz-ihs snippet=”Responsive-Ad”]