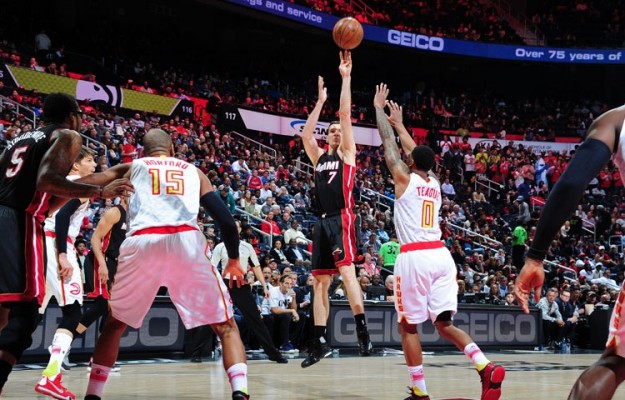 (Atlanta, GA) – Using a makeshift lineup with only nine players in uniform due to injury and suspension, the Miami Heat held off the Atlanta Hawks to come away with a 115-111 victory in road action at Philips Arena on Friday night.

Miami was without the services of Dwyane Wade, who sat out the game with a sore left knee, while Hassan Whiteside and Chris Bosh were also out of the lineup and didn’t travel with the team. Whiteside’s absence was due to a NBA-mandated suspension, while Bosh’s renewed trouble with blood clots kept him off the court.

Wade will undergo an MRI on Saturday, but didn’t seem concerned:

“I feel OK, it’s just a little uncomfortable,” Wade said. “It’s nothing that I’m like overly concerned about. It’s just some soreness I haven’t felt in a while. So I just want to make sure it’s good.”

Deng was asked about whether this win was the team’s most impressive:

“Either this or Denver,” Deng said.

Also chipping in with double-figures in scoring were Gerald Green with 14 points and five rebounds, and rookie Justise Winslow, who missed out on his own double-double with 13 points and nine boards.

Miami head coach Erik Spoelstra spoke after the game about the versatility of McRoberts:

“We didn’t sign him to be a conventional stretch-four. Putting him in a box doesn’t explain what he does.”

McRoberts himself was pleased with the performance:

“I have to say, it was most fun I’ve had since I got here,” McRoberts said. “I’m just glad we got the win. I still don’t care about stats. I don’t care about when I get ’em or when I don’t.”

The Heat, who were also shaking off the rust of a 10-day layoff, had appeared to take control of what had been a tightly-contested matchup midway through the fourth quarter. At that point, they went on a 10-3 run that gave them a 98-90 advantage. However, Atlanta answered with eight consecutive points, and then trailed 101-100 with 3:39 left.

Miami countered by scoring 10 of the next 14 points over the next three minutes to make it 111-104 with 38.2 seconds left. The victory was clinched primarily at the free-throw line, with eight of the final 10 Heat points coming at the charity stripe. Deng proved to be a clutch performer throughout the fourth, collecting 12 points during the period.

Spoelstra commented about the team’s mindset, given the current issues that are plaguing them:

“This group knows there’s a lot at stake,” Spolestra said. “We don’t want to feel sorry for ourselves or wait.”

The victory, which stopped a two-game losing streak for Miami, improved their season mark to 30-24, while the Hawks dropped to 31-25. The win puts the Heat percentage points ahead of Atlanta for first place in the Southeast Division.

The Heat return to action tomorrow night at home against the Washington Wizards in a matchup set to tip off just after 7:30 p.m. ET. Miami catches something of a break because the Wizards will be playing their third game in as many nights due to a rescheduled game that they had to play on Thursday night.
[xyz-ihs snippet=”Responsive-Ad”]