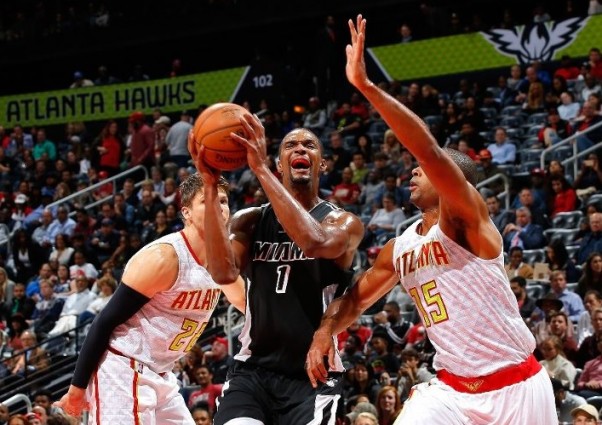 (Atlanta, GA) – Using a combination of solid defense and a domination of the boards, the Miami Heat won their second game in as many nights as they dispatched the Atlanta Hawks by a score of 100-88 on Monday night at Philips Arena.

The backcourt duo of Dwyane Wade and Goran Dragic were a major part of the defensive effort. They virtually shut down the Atlanta backcourt pair of Jeff Teague and Kyle Korver, who made just 4-of-24 shots from the field on the evening.

Afterward, Miami head coach Erik Spoelstra offered special praise about the performance of Dragic, whose defensive effort cost him one of his teeth:

“He has a great toughness and grit to him that this team is just learning about,” said Spoelstra. “Instead of a game ball, we had a game tooth.”

Dragic left the game for much of the third quarter after being the inadvertent recipient of an Al Horford elbow.

“I think we all learned a little something about G tonight,” said Wade.

Meanwhile, Chris Bosh’s reaction to Dragic returning to the game wasn’t quite as dramatic, offering a short analysis:

The Hawks finished shooting 39 percent from the field for the night, but it took 50 percent shooting in the fourth quarter to reach that level. Prior to that, the Heat had held them to a 36 percent effort to hold a 74-61 lead entering the final 12 minutes.

“The identity of this game was toughness, particularly on the defensive end,” said Spoelstra

That fourth quarter push by Atlanta could also be seen in the final rebounding numbers, with the Heat holding a 54-37 advantage. After three quarters, the margin had been 22 at 47-25.

On the Heat stat sheet, Chris Bosh led the way with a double-double that saw him finish with 24 points and 10 rebounds, including four three-pointers. Hassan Whiteside and Luol Deng each came close to joining Bosh in the double-double category, with Whiteside ending the night with eight points and a game-high 13 rebounds and Deng adding 17 points and nine rebounds.

In addition, Gerald Green came off the bench to toss in 20 points, while Dragic took Wade’s admonition last night to heart by putting up 14 shots, connecting six times and dishing out a game-high eight assists.

The Heat missed a golden opportunity to take control early in the game after the Hawks went from making five of their first eight outside shots to missing 10 in a row. That eventually became one of 13 from the field, but after one quarter, Miami only led 22-20.

In the second quarter, things stayed close until just under the four-minute mark when the Heat put together a 10-2 run to close out the half for a 47-38 advantage. After the break, Miami held a double-digit advantage for much of the quarter, leading by as many as 15 on three occasions.

The win at least temporarily stopped the struggles the Heat have had in playing on the road in the latter half of a back-to-back. Prior to this game, Miami had managed just a 3-8 mark in this area since the start of last season, including a November 6 loss at Indiana.

On Wednesday night, the Heat’s brief two-game road trip concludes with a 7:30 p.m. ET clash in Brooklyn against the Nets.
[xyz-ihs snippet=”Responsive-Ad”]