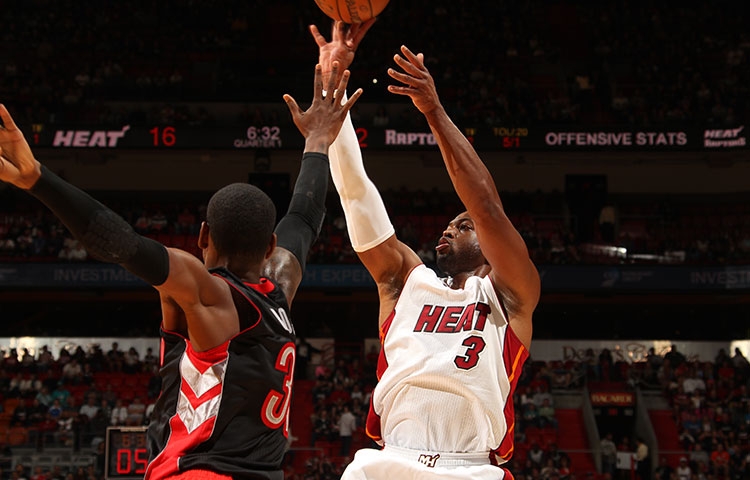 As the only two undefeated teams left in the Eastern Conference, either the Heat or the Raptors had to keel over and give up the sole title.

In the early onset, the tone was set by a rejuvenated Dwyane Wade, who had told reporters before the game explicitly, that yes, he will be playing on the tail end of back-to-backs this year. Wade started the first quarter hot, as he brought out the full repertoire, scoring on an array of floaters and jump hooks. Not only that, but the former Finals MVP was active on the glass and even blocked 6’11” center Jonas Valanciunas. Wade finished the quarter with an all-around 8 points, four rebounds, three assists, and a block.

Ron Rothstein said of Wade, “Very rarely does Dwyane have a bad game in a back-to-back. He’s such a great player, he’s such a competitor.”

As well as Wade performed in the first quarter, the Heat’s lack of interior defense was exposed as the Raptors went to the free throw line for 15 attempts and only took one three pointer before the quarter ended.

DeMar DeRozan scored 13 points in the period on a dazzling display of drives and pull-ups in the painted area.

The second quarter was much of the same.

Toronto continued to feast inside as they ended the first half with 25 free throw attempts, luckily they converted only 14 of them.

On what seemed to be working for the Heat in the first half, assistant coach Dan Craig said, “These guys are really buying into sharing the ball. We’ve done a tremendous job sharing the ball, we have 15 assists…It’s been a great process, these guys have really been grinding these past few weeks…just doing it without an ego, if somebody’s open, move the ball and find good shots.”

After intermission, Wade and Bosh continued to roll and with 4:50 remaining in the third period, Wade banked home a step-back three, which gave the Heat their biggest lead of the night at 83-67.

Wade commented after the game, “Yeah, I called that long. I ain’t say it was goin’ in.”

Through three quarters, the Raptors still had a shot due to Derozan’s 23 points and the team’s 30 points inside the paint.

In the fourth quarter, the story was all about rebounds and free throws.

The Heat could have put away the Raptors earlier if it weren’t for the abundance of missed free throws for Miami. Towards the end of the fourth quarter, Wade, Deng, and Bosh all went 50% from the charity stripe and were fortunate enough for Toronto’s mistakes on the other end.

Toronto’s errors were highlighted by Valanciunas, who finished with 14 points and eight boards, missing a point blank layup at the rim, that would have cut the lead to five and then Kyle Lowry missing two out of three free throws at the end of the ball game.

D. Wade was interviewed at the end of the game by Sun Sports’ Jason Jackson and was asked how he was able to bring such an all-around performance to tonight’s victory. Wade replied with,

“I’m just reading the game. Every game is different. I know that I’m always a threat with the ball. Some nights it’s gonna be up to me to score; some nights I have to get my teammates shots.”