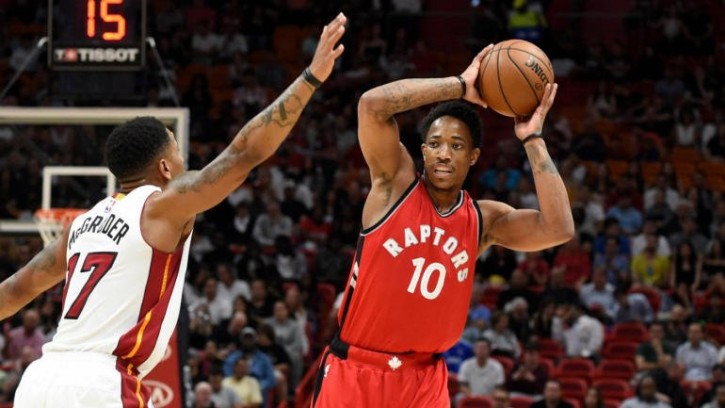 Despite an explosive start in which it made four 3-pointers and had led 33-23 at the end of the first quarter, the Heat offense struggled mightily to get much of anything going for the remainder of the game.

For the first time in his eight-year NBA career, three-time All-Star shooting guard DeMar DeRozan scored at least 40 points in consecutive games as the Raptors won their fourth straight contest on Thursday.

“Our give-a-crap level is pretty high, and it’s one of those things where when you count us out, we find a way,” Raptors head coach Dwane Casey said. “My thing is just find five men who are going to play hard.”

DeRozan was simply magnificent on the court against Miami, going off for a game-high 40 points (14-of-25 from the field and a nearly perfect 12-of-13 free throws made) to go along with six rebounds and three assists.

“You have to credit Toronto. Boy, they really picked up their pressure,” said Heat head coach Erik Spoelstra during his postgame press conference. “It was pretty clear to see that they had us out of our normal rhythm offensively due to their pressure. We didn’t handle it well, but they really got up and in to us.”

Heat star center Hassan Whiteside, who is already dealing with a laceration to his right hand which required 13 stitches, powered through a sprained ankle en route to a team-high 16 points, 14 rebounds and two blocked shots in just 30 minutes of action.

“I’m going to come in here and get treatment tomorrow and we’ll know from there,” Whiteside said. “It’s not crazy like Dion’s (Waiters) or anything, it’s just more annoying.”

Waiters, who has missed the last three games due to a sprained left ankle, should be back before the Heat conclude their regular season.

Raptors reserves Norman Powell and Delon Wright, who is the younger brother of former Heat small forward Dorell Wright, added 14 and 13 points on the night for Toronto, respectively.

The Toronto defense stifled Miami, holding it to just 84 points on 32-of-82 shooting from the field and a dismal 6-of-23 from behind the arc.

Up next, the Heat will head back out on the road to start a three-game road trip on Sunday when they take on the Boston Celtics (46-26) in a matchup with heavy playoff implications. The contest, which is scheduled to tip off shortly after 6:00 p.m. ET at TD Garden, will be broadcast live locally on Fox Sports Sun.
[xyz-ihs snippet=”Responsive-ImagenText”]