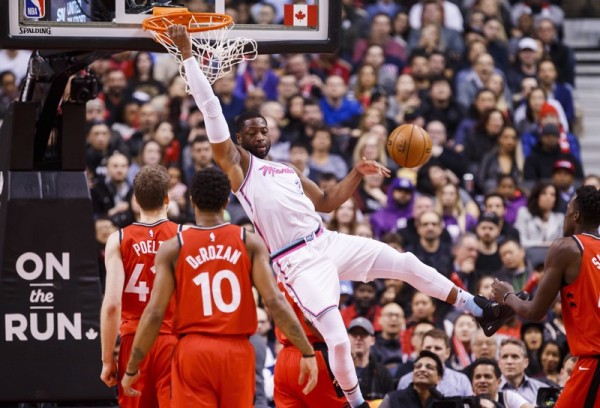 (Toronto, ON) – The Miami Heat had an opportunity to approach the All-Star Break with a bang on Tuesday night when they traveled north to take on the Eastern Conference’s Toronto Raptors. The last time these two teams met back on Jan. 9, the Heat managed to win in stunning fashion with a last-second shot. They had the opportunity to hit a similarly exciting shot in Tuesday night’s game, but ultimately fell short in a 115-112 loss.

“Going into this game we said, and we would continue to say, that if this game is in the hundred and teens this is right in their wheelhouse and I’m sure that’s what they wanted,” Heat head coach Erik Spoelstra said following the game. “It’s certainly not our road map and we paid the price for it, but you have to give them credit, they played well.”

With just 3.9 seconds left in the game, Raptors gurad C.J. Miles had the opportunity to give his team a four-point lead and ice the game. He made his first shot from the line, extending the lead to three at 115-112, but missed his second. Josh Richardson, who finished the game with 10 points, five assists, and three rebounds, grabbed the defensive board, giving the Heat one last chance to tie the game.

With just seconds left in the game, Richardson ran down the court and quickly launched a deep 3-pointer. While the ball seemed to be on target when it came off Richardson’s hands, it ultimately bounced off the rim as the clock expired, ending the game.

Despite the defeat, Miami put up a valiant effort to try to come back in the game. At the onset of the fourth quarter, it had fallen to a 17-point deficit at 98-81 and seemed to be on its way to a near blowout defeat.

With 4:20 left in the game, the Heat stormed back into the game thanks to a 13-0 run. If they had begun their run just several minutes earlier, they may have been celebrating a victory instead of searching for answers after their sixth loss in seven games.

The near comeback was thanks much in part to Goran Dragic, who scored a game-high 28 points and added four assists and two rebounds to his stat line. The Miami bench played incredibly well also, with all four players in the second unit finishing the game with double-digit point totals. James Johnson led the bench in scoring with 16 points and seven rebounds.

Dwyane Wade performed exceptionally well coming off the bench as well, and put in his best performance since rejoining the Heat. Wade finished the game with 10 points, 11 rebounds, and six assists. He even gave fans a glimpse into the past late in the first quarter when he shook his defender, drove into the lane, and leaped towards the basket to complete an emphatic two-handed dunk.

Despite several strong individual offensive performances, the Heat lost the game due to a lack of ball protection. They finished the game with 16 total turnovers and the Raptors capitalized off of many of them, scoring 28 points off turnovers in the game.

“We had a bad three, four minutes right there and you always can go back and put it on the defensive side of the ball, but we had some turnovers,” Wade said following the game. “This is great fast-breaking team, so you give them extra opportunities by turning it over. They’re tough.”

While the Heat can take several positives away from this game, it marks another loss in what has been an incredibly disappointing two weeks that has seen them fall from near the top of the conference standings to just hanging onto the eighth seed in the Eastern Conference. They will look to salvage the month of February when they travel to Philadelphia to take on the 76ers on Wednesday night. Following Wednesday night’s game, the Heat will not take the court again until after the NBA All-Star break on Feb. 23.
[xyz-ihs snippet=”HN-300×250-TextnImage”]