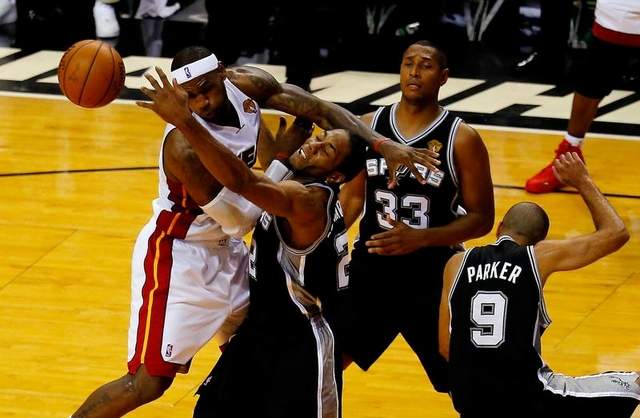 (Miami, FL) — The San Antonio Spurs have been a model of consistency for well over a decade, but in game three of the NBA Finals, that consistency hit an all-time high, specifically in shooting the basketball.

San Antonio set an NBA Finals record, shooting 75.8-percent from the field in the first half, winning decisively, 111-92 in a pivotal game three matchup against the Miami Heat.

“I don’t think we will shoot 76-percent in a half ever again,” Spurs Head Coach Gregg Popovich said.

The offensive efficiency for each team was on point to open the game. Neither team missed a shot until the eight minute mark in the first quarter, yet Miami found itself down 22-10 when LeBron James threw down an emphatic dunk, igniting the “White Hot” Miami crowd.  James picked up where he left off in game two, scoring 14 points and making 5-of-6 from the field in the first quarter. James finished with 22 points, seven assists, and six rebounds but carelessly turned the ball over seven times in the loss.

Despite the stellar performance from “King James,” the effort from the Heat defensively lacked in the first quarter as Kawhi Leonard exploded for 16 first quarter points, the most in his career for any quarter.

“[Popovich] just wanted me to go play basketball out there” Leonard said. “I just tried to be more aggressive tonight…”

Leonard finished with a game-high 29 points on 10-of-13 shooting, outplaying James offensively and defensively down the stretch and silencing the American Airlines Arena crowd.

“We just wanted him to be who he has always been in the regular season and playoffs,” Popovich said about Leonard. “That’s how he played all year long; he has to be one of the better players on the court for us to win.”

San Antonio utilized stellar ball movement and great interior passing to cruise to a 41-25 first quarter lead after Manu Ginobli rattled in a three point shot as time expired.  The Spurs, who have lost five of eight games on the road this postseason, were able to find the bottom of the net with unmistakable accuracy, missing only two of the first 21 shots they took.

For the Heat, the first half was a collapse of epic proportions, but it was as spectacular for the Spurs as it was futile for Miami. Miami trailed 71-50 at halftime, surrendering the most points in a half in franchise history as the defense showed little effort to stop dribble penetration and surrendered 32 free throw attempts.

“They came out at a different gear than what we were playing at, it just seemed like we were on our heels for most of the first half,” Heat Head Coach Erik Spoelstra said. “You have to give them credit for coming out with an aggressive mindset on both ends.”

In an attempt to complete a dramatic comeback, Dwyane Wade managed to do most of his damage in the second half, scoring 22 points but turning the ball over five times. After trailing by 25 points in the first half, Miami worked its way back into the game in the second half with the help of the supporting cast. Rashard Lewis finished with 14 points; connecting on 4-of-5 three point attempts, to contribute to the performance of James and Wade. Ray Allen added 11 points to lead all bench scorers for Miami. Oddly, after averaging 39.5 touches per game in the first two games of the Finals, Chris Bosh, was the long forgotten third wheel yet again, managing just 12 touches in game three. Bosh made all four of the shots he took but only added nine points.

Despite the effort a certain Heat player thought the deficit was too big to overcome.

“We are kidding ourselves if we think we are going to comeback from 25 down, no matter how much time is left,” Bosh said.

The intensity and effort that the Spurs displayed in the first half was inherited and taken over by the Heat to open the second half. Miami fought for offensive rebounds, loose balls and forced San Antonio into tough, contested shot but after trailing, 81-74 with just under two minutes remaining in the third quarter, Miami was unable to cut into the Spurs lead any further.

“We have to play much harder; much more efficient to give ourselves a chance to win,” Spoelstra said.

After torching the Heat from three point land in last year’s NBA Finals, Danny Green scored 15 points, missing only one shot and also had five steals, disrupting the flow of the Miami offense. It was a collective effort by the Spurs, with five players scoring in double-figures and the duo of Tim Duncan and Tony Parker scoring just 29 combined points.

For Miami it was the first home loss of this year’s playoffs in nine games and first in the past 11 playoff games dating back to last year.

“We just have to regroup tomorrow and come out with a much better game on Thursday,” Spoelstra said.”

The 111-92 outcome from game three was eerily similar to the 113-77 blowout the Spurs handed the Heat in game three of last year’s NBA Finals. Now all eyes are on Miami in game four to see if they will respond the same way they did last year.

“It’s the finals, everything is magnified,” James said. “You want to win at this point in the season, we will get better; we hate the performance we put up tonight.”