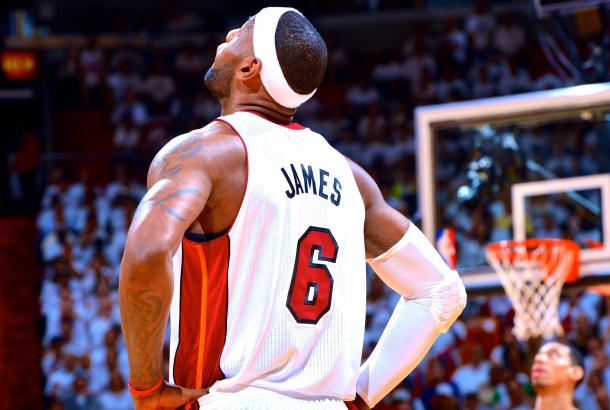 (Miami, FL) — Boos filled the American Airlines Arena as the San Antonio Spurs not only filled the scoreboard with points, but also filled the Miami Heat with doubt of a third consecutive NBA title. Trailing by double digits from the middle of the second quarter to the final horn, the Heat struggled to stop the fluid ball movement of the Spurs, while playing sloppy on the offensive end, losing 107-86 to plummet into a 3-1 series hole.

Beyond LeBron James, who finished with 28 points and eight rebounds, the Heat had little to no production from the rest of the lineup, as Dwyane Wade had a miserable shooting night, hitting only 3-of-13 shots for just 10 points. Chris Bosh, meanwhile, was once again ineffective for a majority of the game, scoring only six points in the final three quarters after six in the first. The Spurs led by as much as 24, never losing ground after a 55-36 halftime advantage. Miami would get as close as 13 during the second half, but would trail by at least 20 points for the majority of the half before unloading the bench during the middle of the fourth quarter.

“I don’t think any of us were expecting this type of performance,” Heat Head Coach Erik Spoelstra said. “We just couldn’t get into a rhythm on either side of the ball.”

The Spurs were an offensive juggernaut for a second consecutive game, shooting over 50 percent from the field for nearly the entire contest and finishing with a 57 percent clip. Known for its tenacity on defense, the Heat had no answers for a suddenly-faster lineup with Boris Diaw at power forward, as the 32-year-old veteran neared a triple-double with eight points, nine rebounds and nine assists.

“[Diaw’s] been amazing, especially this series,” Tim Duncan said. “I think he’s found his rhythm. He’s been the key for us.”

However, the key problem for Spoelstra reared his braided head for a second straight time, as Kawhi Leonard put together another dynamic performance with 20 points, 14 rebounds, three assists, three steals and three blocks, highlighted by a tremendous put-back dunk off a missed three-point shot by Patty Mills near the end of the first half.

“When he (Leonard) is aggressive, we’re a better team,” Diaw said.

Every Spur that played, scored, as the bench made another large imprint on the game with 41 points. Patty Mills led the Spurs reserves with 14 points, going 4-of-6 from three. As Mario Chalmers and Norris Cole continued to regress at the point guard spot with a combined eight points for the night, Tony Parker continued to frustrate the Heat off countless screens, finishing with 19 points on 8-of-15 shooting.

Equally baffling Thursday night was the Heat’s offense, which was pressured into several bad shots and below 40 percent shooting in the first half. Miami, which has trailed after every first quarter in this series, played catch-up once more in the first 12 minutes, trailing 26-17. Boos from the home crowd began to increase by halftime, as the Heat had no fast-break points, scoring under 40 points after the first two quarters for just the second time this postseason. After just nine points in the first half, James took the bulk of the offense on his shoulders, scoring 19 of the team’s 21 points in the third quarter before scoring nothing in the final 12 minutes. While James shot 10-of-17 for the game, the rest of the starters shot an abysmal 11-of-34.

“I tried to will us back into the game, but it meant nothing,” James said.

The Spurs managed to dominate the Heat 46-30 in the paint, while pounding the two-time defending NBA champions on the boards by a 44-27 margin. While the Spurs acknowledged Duncan’s playoff-record 158th double-double (passes Magic Johnson) with 10 points and 11 rebounds, the Heat is up against both unfortunate and unfamiliar history, losing consecutive home playoff games for the first time since the 2011 NBA Finals against the Dallas Mavericks, the only series it has lost in the Big Three Era. Adding to the pressure is the first 3-1 series deficit in the James-Wade-Bosh era, a deficit no team has ever overcome to win a Finals series.

“Our guys feel we can win at any time in any building,” Spoelstra said. “That’s our focus the next 24 hours.”

When asked about the possibility of adding versatile forward Michael Beasley to the rotation to spark more offensive output out of the reserves in Game Five, Spoelstra said the team will take a wait-and-see approach. Beasley, who has played in just three games this postseason for a total of 3:22, averaged double digits in two previous postseason outings with Miami. In all, the Heat will have to look for any and all options to counter the well-oiled machine that is the Spurs offense.

“All we can do is worry about Game Five, try to go up there in a hostile environment and try to win one and go from there,” James said.