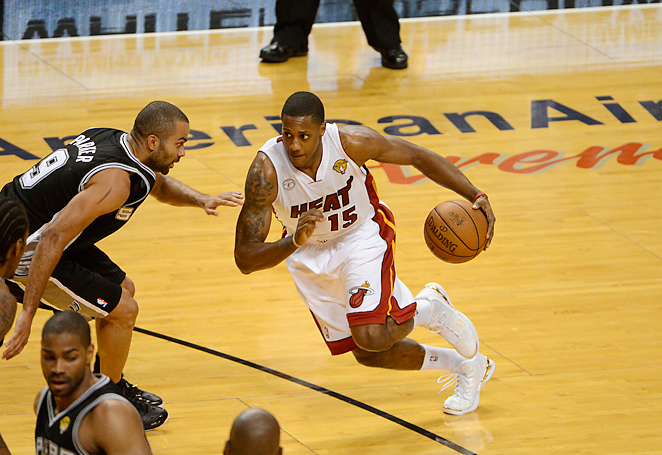 (Miami, FL) — Shooting 52 percent from the field and 47 percent from the three-point line, the Miami Heat had quite the offensive outing in Game Three of the NBA Finals. Defensively, however, it had arguably the worst defensive performance in the Big Three Era, losing decisively to a San Antonio Spurs team that has suddenly pushed the backs of two-time defending NBA champions against the wall.

Following a 111-92 blowout loss that saw the Spurs score a Finals-record 71 points in the first half, the Heat now face a must-win Game Four and must buckle down defensively to avoid a potential 3-1 series hole.

“It’s about the next 24 hours, trying to figure how we can get Game Four,” Heat Head Coach Erik Spoelstra said following Wednesday’s practice. “We did not play a good basketball game. All of us own that.”

Momentum seemingly belonged to the Heat after a clutch performance by LeBron James in Game Two, but the Spurs had other plans. The Heat were stymied from the opening tip of Game Three, allowing an eye-widening 41 points in the first quarter while putting forth an uninspiring defensive effort. Despite the best efforts of LeBron James and Dwyane Wade to keep the Heat in striking distance, turnovers were the team’s Achilles’ heel, as 20 miscues led to 23 Spurs’ baskets.

“It was very frustrating last night, the way we approached the game,” James said. “Lots of mental breakdowns.”

Leading the way in mental breakdowns has arguably been Mario Chalmers, whose abysmal play throughout the series has led to more fouls (12) than points (10). But Spoelstra said the team plans to stick with Chalmers as it faces a pressure-packed Game Four. Backup point guard Norris Cole (10 points on 4-of-15 shooting in the series) hasn’t been playing as well either, so Chalmers would definitely have to increase his value on both ends of the court to help the Heat in trying to match a Spurs offense that has been hitting on all cylinders. But first, Chalmers’ confidence must be restored to the level it was during the Heat’s previous two title runs.

“It’s in his head, I think,” James said of Chalmers’ struggles during the Finals. “His confidence may be a little shaken. I’m going to stay on him. Maybe I need to get back on him like I used to in the past.”

James, referring to his angry outburst towards Chalmers during a timeout of a game against the Indiana Pacers last December, also needs to get himself back on track after seven turnovers in Game Three. The Spurs’ insertion of Boris Diaw into the starting lineup allowed James’ defender Kawhi Leonard to move more fluidly on offensive plays, as Diaw’s slight upgrade in versatility over center Tiago Splitter matched the smaller, quicker lineup of the Heat. Leonard’s career-high 29 points powered the Spurs’ relentlessness on both ends of the court, keeping Leonard fresh enough on defense to get two steals and two blocks and help force numerous Heat errors. James knows that Leonard can’t have an encore performance if the Heat is expected to even the series at two apiece.

Meanwhile, a suddenly big piece of the Heat’s puzzling troubles exists in the lack of touches and impact of Chris Bosh, whose four shot attempts were his lowest this postseason. After putting together consecutive 18-point games in Games One and Two, Bosh was astoundingly ghost-like in Game Three, finishing with only nine points. Part of Bosh’s disappearance is due to the Heat scrambling for points after a deficit early in the game, the other part coming from his inability to assert himself offensively. James doesn’t want, nor can afford for Bosh to seemingly vanish for another game.

“He’s too big for our team for him to ever get lost,” James said. “We can’t allow that to happen for us to be successful.”

Wade’s solid shooting (8-of-12 from the field in Game Three) was vastly overshadowed by his lack of defense on Danny Green, who was sharp throughout Game Three with 15 points on 7-of-8 shooting. Wade has to go back to turning defense into offense, forcing turnovers and monitoring Green’s three-point spots. Green is not versatile and pesky like the Pacers’ Lance Stephenson, but he has shown to be a lethal shooter with given space. The Heat’s trademark attack from game to game is defense and fast-break points, both of which didn’t exist during Game Three. James has been consistent at disrupting shooters and penetration to the hoop, but he needs Wade to create just as much chaos from beginning to end to avoid another high-percentage night from the Spurs.

Bench play has definitely been the largest difference between the teams, as the Spurs’ reserves have dominated the Heat’s bench 100-55 this series. Beyond Ray Allen’s dependable play throughout the series (12 points per game), the rest of the bench has lacked production and impact towards a deep Spurs bench led by Manu Ginobili (15.3 points per game in series). Spoelstra’s decision to toy around with minutes for rotational players like Shane Battier, Udonis Haslem and James Jones hasn’t had a resounding effect against San Antonio, as each of the three players have alternated between starter, reserve and inactive throughout this postseason. Spoelstra must finalize a rotation that will mark some consistency and stability off the bench. The Spurs have done so all season, so why couldn’t the Heat do the same?

In all, Miami has to make its presence felt in the opening minutes of Game Four and prevent the Spurs from getting hot early on. Trailing after the first quarter in each of the three games this series, no quarter can be more important to the Heat than the first one Thursday night. Getting the Spurs comfortable in any arena usually means they win in a marginal fashion. Wade is not looking at Game Four as a must-win, but blood will surely be in the water in favor of the Spurs if the Heat suffers another loss with a return trip to San Antonio for Game Five in its wake.

“If you anything about us, we’re an in-the-moment team,” Wade said. “Right now, the moment is – the day after a loss – is getting better mentally, physically, and then coming in tomorrow and playing the game of basketball here on our home floor and trying to win Game Four. That’s all we’re focused on.”