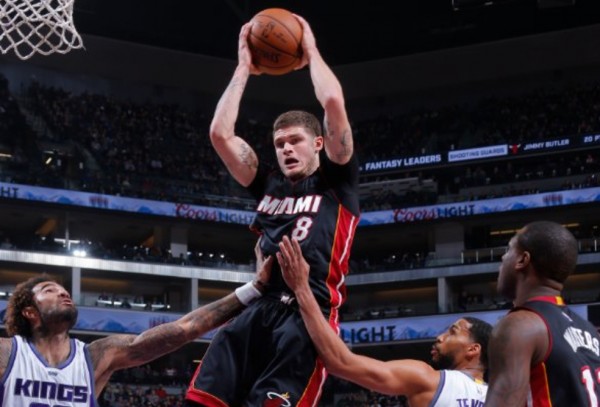 (Sacramento, CA) – Tyler Johnson’s 3-point play with 27.8 seconds left helped the Miami Heat put an end to their six-game losing streak with a 107-102 victory over the Sacramento Kings at Golden 1 Center on Wednesday night.

Johnson drove midway into the paint before putting up an off-balance shot while being fouled that miraculously went in the basket. He then converted the free throw to put the Heat up three and essentially win the game.

Sacramento’s DeMarcus Cousins missed with 18.7 seconds left, followed four seconds later by a 3-point miss from Cousins again, giving the ball back to Miami. Johnson’s two foul shots with 11.5 seconds to go then officially put the game in the win column for the Heat.

“It’s not a coincidence that Tyler’s most memorable moments come down the stretch,” Miami head coach Erik Spoelstra said. “He’s a fearless player, a fearless competitor, and if you have that kind of mentality in close games, you’re just going to find a way to put your fingerprints on the game and that’s what Tyler does.”

The victory didn’t come without a lot of stress, due to the Heat nearly blowing a double-digit lead in dramatic fashion. With 2:11 remaining in the third quarter, they held an 87-68 lead. The Kings then scored the last 13 points of the third quarter and continued their push at the start of the fourth quarter, completing a 23-2 run to take a 91-89 lead with 9:29 left.

“We got pushed and we felt all the emotions of building a 19-point lead, giving it up and having to execute it again,” Spoelstra said. “We’ve been talking about this for a while, but particularly on this trip, that we really want to take the next step forward in these ‘clutch’ games. To be able to defend, be more disciplined and make plays.”

Johnson came off the bench to lead the Heat with 23 points and six assists on the night, part of a reserve squad that collected 61 points on the night. The lone starter to score in double figures was Goran Dragic, who had 19 points and seven assists, hitting all nine of his free throws.

“We had to find a way to get this one done,” Johnson said immediately after the game. “I thought we were rolling in the first half and even early in the third. They’re a good team, they’re going to come back. For this young group of guys to go through adversity, and as many close games as we’ve been in and come up on the short end of, it was good to get this one.”

“Guys played with great energy. I got confused, I wasn’t used to having so many players on the bench. I actually had options,” Spoelstra said. “I actually had to coach. Usually guys play to fatigue and then I send guys in.”

The Heat have four games left on their six-game road trip, with a pair of games set for this weekend at Staples Center in Los Angeles. On Friday night, they’ll take on the Los Angeles Lakers in a game set to tip off just after 10:30 p.m. ET, then face the Clippers on Sunday in an afternoon clash.
[xyz-ihs snippet=”Responsive-ImagenText”]