Miami Heat vs. Sacramento Kings Game Recap: The Way of the Dragic 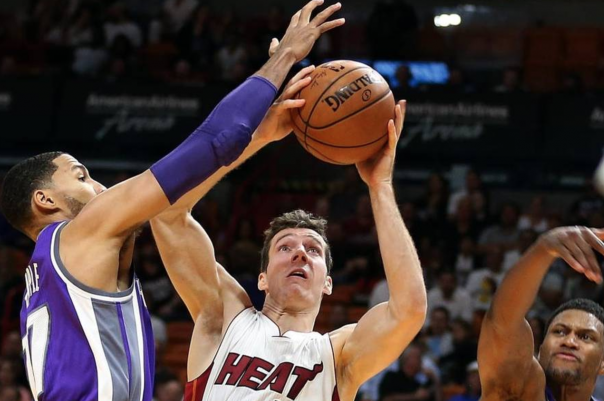 (Miami, FL) – For the first time in their young 2016-17 campaign, the Miami Heat (2-2) snapped a two-game losing streak on Tuesday night against the Sacramento Kings (2-3) after they pulled away with a 108-96 overtime win at American Airlines Arena.

Point guard Goran Dragic had a superb performance to lead the Heat, as he scored seven of his 25 points in overtime en route to 8-of-14 field goals (including 5-of-8 from behind the arc) to go along with eight assists, four rebounds, two steals and two blocked shots.

“I think it was good for us to go through another emotional game in the second half,” Heat coach Erik Spoelstra said. “Emotions are running high. A lot of frustration, a lot of elation, a lot of everything in between. But it was good to see us just find a way to grind it through all that. For one night, that’s a positive step forward from the last two games, to be able to find a way to finish it out and find some stability going down the stretch.”

Aside from Dragic’s gorgeous display on the court, guard Tyler Johnson, who received a $50 million contract over the offseason, came off the bench with 22 points, four rebounds, two assists, two steals and two blocks.

“That tells us that we’ve got a lot of options on offense,” Dragic said. “Coach (Spoelstra) is always saying, ‘Be yourself,’ and we need Dion to be aggressive so Tyler and me can make plays and get inside the paint. Unfortunately in tonight’s game, Hassan (Whiteside) got into foul trouble. Somebody had to step it up, and we all did it.”

For the Kings, star center DeMarcus Cousins was dominant for most of the game, as he tied for a team-high 30 points with small forward Rudy Gay.

However, despite having committed zero fouls in the first three quarters of the game, Cousins was whistled for a whopping six fouls in the fourth quarter alone and was unable to compete in overtime.

Newcomer starting shooting guard Dion Waiters had his best game in a Heat uniform on Tuesday night, going off for 20 points and four assists, while Hassan Whiteside had his fourth double-double in five games with 14 points, 11 boards and two blocked shots despite foul trouble.

“I don’t want to speak on that, because the NBA is going to take my money,” Whiteside said after the game.

Up next, the Heat will head back out on the road on Friday night when they play the Toronto Raptors (2-1) at Air Canada Centre. The contest, which is scheduled to tip off shortly after 7:30 p.m. ET, will be broadcast live locally on Fox Sports Sun.
[xyz-ihs snippet=”Responsive-ImagenText”]