Miami Heat vs. Phoenix Suns Game Recap: Proving a Lot With a Lot to Prove 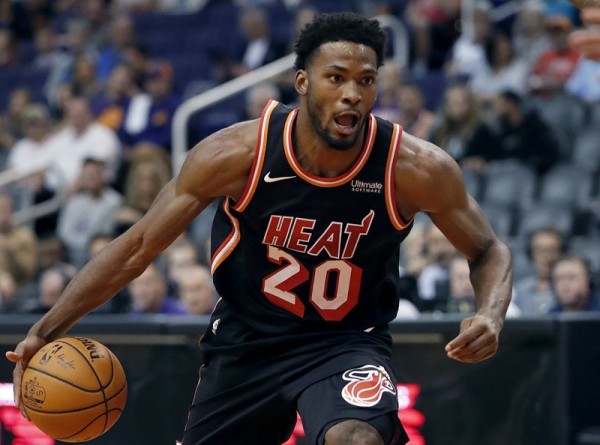 (Phoenix, AZ) – The Miami Heat had a lot to prove following Monday night’s blowout loss to the Golden State Warriors, and they did just that in Wednesday night’s game versus the Phoenix Suns.

Before Wednesday’s game, the Heat had struggled to a 1-4 record against the Western Conference, but in the fifth game of their six-game road trip, the Heat showed glimpses of their potential with a dominant display on both sides of the court on their way to a decisive 126-115 victory.

The main focus for Heat fans during the game was on Hassan Whiteside, who took the court for the first time since being benched against the Warriors on Monday night, and Justise Winslow, who started yet again on the team’s road trip. Much to the delight of the Miami faithful, the talented youngsters put on two fantastic performances.

Whiteside dominated on the offensive side of the ball, scoring 23 points, while adding 10 rebounds and four blocks to his impressive stat line. He also performed well in the waning moments of the game when he scored four straight points on back-to-back eye-popping alley-oops.

“Hassan was tremendous tonight,” head coach Erik Spoelstra said following the game. “He had a great motor, great disposition. His focus level was extremely high. He knows how important he is to our success. When he’s playing at this level, this ball club can win a lot of games.”

As for Winslow, not only did the offense seem to flow better with him starting at the 3 (as seven players ending the game with double-digit points), but Winslow himself displayed the skills that Heat fans have hoped to see for quite some time. He finished the game with 14 points, six rebounds, and five assists in a performance that may have convinced Spoelstra to leave the 21-year-old in the starting lineup for good.

“I just try to be aggressive,” Winslow said from the Heat’s locker room. “Biggest thing is, being out there on the floor I want to make a difference, so going out there, being confident, playing my game, and trusting my teammates.”

Thanks to Winslow, Whiteside, and the Heat’s leading scorer of the night, Goran Dragic, who finished the game with 29 points, nine rebounds, and four assists, the Heat came hot out of the gates to start the game. By the end of the first quarter, Miami had a 36-27 lead and never really looked back.

“Feels great. It’s not me, it’s my teammates,” Dragic said of his season-high scoring effort. “They put me in the right spot to I can try, so I can try to attack, and try to be me, so the credit goes to them.”

In the second quarter, the Heat enjoyed more of the same as they continued to hit shots on the offensive side and dominated the boards on the defensive side, outrebounding the Suns, 53-34 on the night.

One of the defensive highlights of the game came on one of Whiteside’s four blocks, when the 7-footer secured a two-handed denial over Suns point guard Mike James.

@youngwhiteside with the MONSTER block followed by a STARE DOWN! ? pic.twitter.com/EmpeRYPUW2

In the final period, the Heat once again managed to take control and secured a double-digit lead with just 3:47 remaining in the quarter. Moments later, however, Suns star guard Devin Booker managed to get to the line, and then hit a jumper on the following possession to put the Heat lead at six once again.

It looked like the Heat were going to let themselves fall into another last-second nail-biter, but just as the Suns gained momentum, the Heat slammed the door shut, when Dion Waiters, who had missed the last two games following the birth of his daughter, hit a step-back jumper, followed immediately by a highlight-worthy 28-foot 3-pointer. While the Suns continued to battle following Waiters’ back-breaking three, it was clear that the Heat had secured the victory as fans began filing out of Talking Stick Resort Arena well before the clock struck zeros.

Wednesday’s game was perhaps the most complete performance from the Heat so far this season. They will look to add to their momentum as they travel to Salt Lake City to play their fifth away game in a row against the 5-6 Utah Jazz on Friday night.
[xyz-ihs snippet=”Responsive-ImagenText”]