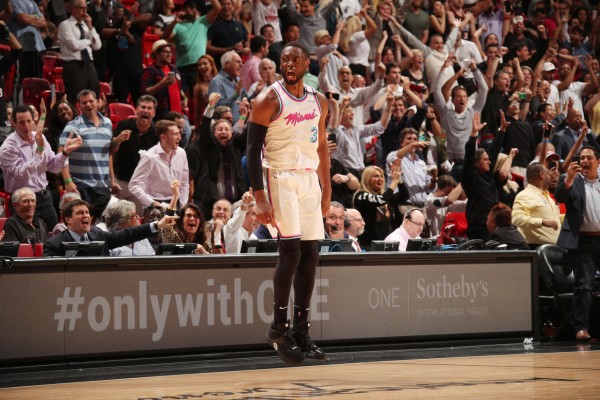 (Miami, FL) – When Dwyane Wade was traded to the Miami Heat back on Feb. 8, fans were likely hoping for what took place in Tuesday night’s game against the Philadelphia 76ers. While the Heat had been down for much of the contest, Wade managed to take over the game in the fourth quarter, and completed the 102-101 victory with a stunning game-winning shot.

Wade dominated much of the fourth quarter, scoring 15 of his game-high 27 points in the final frame, and with the the game on the line, he proved that he is still one of the most clutch players in the NBA. The Heat were down 101-100 with the clock winding down and everyone on the court knew Wade was going to take the last shot. While he was blanketed by 6-foot-10 76ers point guard Ben Simmons, Wade rose to the challenge and hit a 21-foot jumper to give the Heat the lead and the much-needed victory.

“Big win, man,” Wade said following the game. “It’s time for playoffs, for us to get ourselves ready. We needed a win like this, where it wasn’t perfect and we all had to do something down the stretch to get it done. This one right here feels good. We got one day off before our next game, but we’re going to enjoy this one, but learn from it and try to be better next time.”

The 76ers had defeated the Heat in two previous meetings earlier this season. Additionally, prior to Tuesday night’s game, the Heat were two games behind the 76ers in the Eastern Conference standings. This victory gives Miami a great chance to overcome the 76ers in the conference standings. It also gives them the chance to potentially tie the season series with one more game against Philadelphia left to play.

Aside from Wade, Miami enjoyed several strong performances. Goran Dragic bounced back from a poor performance in Saturday’s game, finishing the night with 21 points, six rebounds, and five assists.

“It’s always a tough game for us, but we finally beat them here at home. It’s a huge win for us, two in a row, so hopefully we’re going to continue like that, but yeah great win,” Dragic said before discussing Wade’s last-second shot. “Tonight it was phenomenal. He was getting to his spots. He was making his shots, and he was tremendous in this game.”

Kelly Olynyk was productive while knocking off the rust in his first game back since sustaining a shoulder injury back on Feb. 5. He finished the game with nine points, three rebounds, and three assists. While the Heat were happy to have Olynyk back on the court, they unfortunately could miss both Wayne Ellington or Tyler Johnson for the near future after both players sustained injuries in the game. First, Ellington went down with a left quad contusion and then Johnson left the game after his knee collided with a 76ers defender.

After limping to the All-Star Break earlier this month, the Heat have now won two games in a row as they continue to fight for their playoff lives. That fight will continue on Thursday night, when they host the Los Angeles Lakers in Miami.
[xyz-ihs snippet=”HN-300×250-TextnImage”]