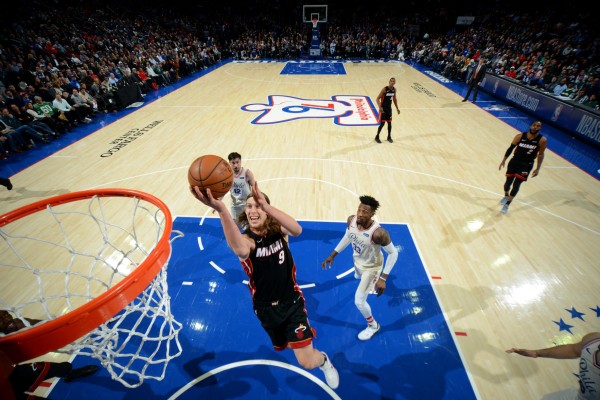 (Philadelphia, PA) — Despite putting together a furious-fourth quarter rally, the disastrous second and third periods by the Miami Heat sent them to their second straight defeat as they fell to the Philadelphia 76ers by a score of 103-97 at Wells Fargo Center on Friday night.

Those two quarters worth of struggles became especially painful when the Heat managed their crazed fourth-quarter rally that saw them slice what had been a 28-point deficit with 11 minutes left down to four, courtesy of an ill-fated 35-11 run.

Kelly Olynyk came off the bench to score 19 points and grab six rebounds for the Heat, while fellow reserves Wayne Ellington and rookie Bam Adebayo scored 16 and 15, respectively. Adebayo also picked up a double-double by grabbing 13 boards.

“I’m just paying attention to detail and going as hard as I can,” Adebayo said of his continuing improvement.

The only starters to reach double figures in scoring were Josh Richardson with 12 and Goran Dragic with 10. On the glass, Justise Winslow hauled down 12 and Hassan Whiteside finished with nine on the night.

The Heat’s own meltdown began during the second quarter, when they connected on just 29 percent from the field, which allowed the 76ers to take a 51-41 lead into halftime. Miami had entered the quarter trailing by one at 24-23, but Philadelphia was fueled by a 15-6 run during the first seven minutes of action, with the two teams then trading baskets until intermission.

“Our lack of connection on both ends of the court,” Winslow said about the causes for the poor play. “Everything for them offensively was too easy and we just weren’t connected and it showed.”

Total collapse then followed as the 76ers blew the game open with a 21-5 run to start the second half off. That gave them a 72-46 lead, with the Heat plagued by a 2-of-11 effort from the field to begin the quarter. While Miami managed to improve in that area as the period rolled on, the damage was done and Philadelphia maintained that same 26-point lead at 86-60 when the quarter had ended.

“We couldn’t execute and couldn’t get into any kind of coherent rhythm,” Heat head coach Erik Spoelstra said of the third quarter. “They came down and capitalized in transition early in that third quarter and broke open the game.”

That third quarter battering was due to not only the Heat’s frigid touch from the field, but also the 59 percent shooting by the Sixers in that same category. The range of those shot attempts by Philadelphia also expanded during the third as they hit on 5-of-8 on 3-pointers and continued dishing the ball with abandon by collecting 19 assists during those middle two quarters.

With Philadelphia seemingly in control and holding a 90-62 lead early in the fourth, Miami suddenly awakened and ran off 17 unanswered points. When Olynyk drilled a 3-pointer with 5:07 to go, it chopped the 76ers lead to nine at 91-82. Olynyk then later split a pair of free throws with 1:58 left to make it 96-91. One final chance to reduce the margin further in the final 23 seconds came up short.

Indicative of just how dramatically Miami’s fortunes changed in those final 12 minutes, they entered the fourth having shot just 33 percent from the field. That was followed by a 57 percent effort in that department on 12-of-21 shooting.

“We just said, ‘Keep fighting, keep fighting,'” Adebayo said of the team’s comeback effort. “We just said we have to get three stops in a row and then worry about the offense.”

The Heat now face a quick turnaround as they conclude their four-game road trip with a Saturday night clash against the Detroit Pistons. That contest will get underway just after 7 p.m. ET.
[xyz-ihs snippet=”HN-300×250-TextnImage”]