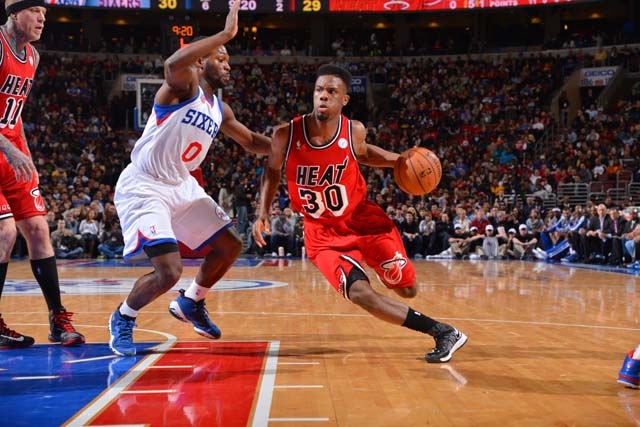 (Philadelphia, PA) – The Miami Heat (1-0) play their first game of the season on the road on Saturday night when they travel to the Wells Fargo Center to play the Philadelphia 76ers (0-1).

Following talk of the Heat’s demise in the post-LeBron era, the team responded by defeating one of the top teams in the Eastern Conference, the Washington Wizards. Chris Bosh led Miami with 26 points and 15 rebounds, while Norris Cole had a career-best performance with 23 points in the Heat’s 107-95 win over the Wizards.

Following the Heat’s opening season victory, coach Erik Spoelstra had the following to say about his team’s performance in the postgame press conference:

“It was a good team win. After a solid week of work we’re not 100 percent results-based but you like to see a residual from the work, the focus and the commitment of the past week….We probably played some of our best defense going down the stretch.”

While the Wizards are considered one of the top three or four teams in the conference, the 76ers are widely regarded as the worst team in the NBA. They lost their season opener on Wednesday night to the Indiana Pacers by a score of 103-91. Tony Wroten led the Sixers with 22 points on 9-of-21 shooting.

Heat rookie James Ennis had an electrifying dunk in the fourth quarter over the Wizards’ Rasual Butler. While he posted just five points in 15 minutes of action, his impact was recognized by coach Spoelstra following the game:

“Obviously James just plays with incredible energy. He’ll make you watch even if he makes mistakes. He’s active, he’s all over the place, he just has a knack for the ball. Beginning of the fourth they (Ennis and Shabazz Napier) showed some great poise.”

Perhaps most impressive about the Heat’s regular season opener other than Ennis’ dunk was the play of Cole. Dwyane Wade complimented the fourth-year guard following Friday’s practice:

“He puts work in at the point guard position. The opportunities don’t come along all the time. Obviously he took advantage of it in a big way, and we needed that. The big shots that he made for us, he played an amazing game. Is he going to have that same role every night? No. But just to know that he has the capability of making those shots and making great plays is big for us.”

Cole may experience his best season yet during the fourth year of his NBA career. For the first time he’s a member of the Heat’s starting lineup. With LeBron James gone and Wade getting up there in age, the new starting point guard has an opportunity to be much more aggressive in his offensive approach.

That scoring void left by LeBron’s departure seemed to provide a spark for Bosh. As mentioned earlier, the 6’11” big led the Heat with 26 points and a team-high 18 shots attempted. Coach Spoelstra acknowledged Bosh’s impact on the offensive end for the team:

“This has been happening for four years. He’s been developing new aspects of his game, he’s reinvented himself. He’s so much more of a dynamic player now than he was then (with the Toronto Raptors). And then you add the leadership. But he is also a true two-way player, which he wasn’t necessarily required to do in his earlier years in Toronto. He was fantastic tonight. We run the offense through him where we’re not necessarily clearing out and letting him go to work. He’s a great decision maker of when he has an opportunity to attack or just as important to facilitate. Pretty much through the last minutes of the fourth quarter, we ran the offense through him.”

While the Sixers aren’t expected to win many games this year, the Heat will need to continue to develop team chemistry as they visit Philadelphia. Josh McRoberts practiced in full for the first time following toe surgery on Friday. He very may well making his season-opening debut versus the Sixers.

Both Danny Granger (hamstring) and Udonis Haslem (quad) continue to nurse injuries as they sat out in the win over the Wizards. Granger is expected to sit out versus the Sixers, while Haslem remains a question mark.
[xyz-ihs snippet=”Responsive-Ad”]