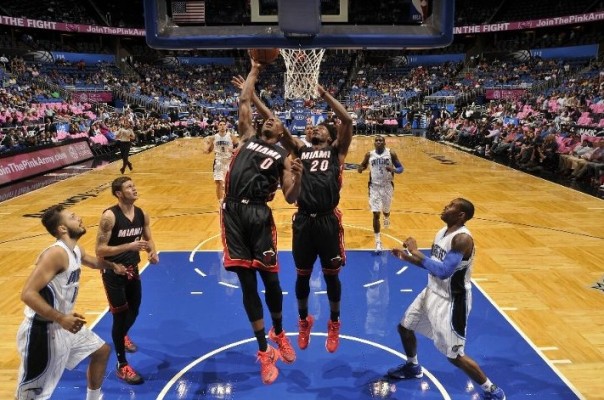 (Orlando, FL) — Former Miami Heat guard Shabazz Napier scored 11 points for the Orlando Magic in overtime to help hold off a comeback-minded Heat squad in a 95-92 victory for the Magic at the Amway Center on Tuesday night.

In that extra session, Miami tallied the first three points, but then watched the Magic run off eight unanswered points in the space of minute. The Heat would battle back to tie it on a Justise Winslow layup with 33.4 seconds remaining in overtime.

However, Napier then connected on three free throws with 17.1 seconds to go after being fouled. Josh Richardson then sandwiched a pair of three-point attempts for Miami around one by James Ennis, all of which came up short, to drop the Heat to a 1-3 preseason record thus far.

Richardson led the Heat with 18 points, while Keith Benson and Winslow each contributed double-doubles on a night that saw no regular starters take the court for Miami.

The Heat appeared to be done in the first few minutes of the fourth quarter, when Orlando ran off eight unanswered points to take the 70-56 advantage. However, Miami went on a 14-2 run to get within a single basket, only to watch the Magic then run off six straight points.

The Heat countered with 10 unanswered points of their own, the last coming on a thundering alley-oop dunk from Ennis. However, after Tre Kelley split his two free throws, Orlando’s Nnanna Egwu poured in a layup with 10.1 seconds to play. Gerald Green’s jumper at the buzzer came up short, sending the game into overtime with the game tied at 81 apiece.

The key to the Miami comeback was Chris Andersen’s 10 points, and a key block by Greg Whittington that kept the game deadlocked at 76.

Both teams fell victim to ice-cold outside shooting for a good portion of the first half, with the teams combining for just a 27 percent success rate from the field during the first 18 minutes. During the final six, the percentage jumped to 60 percent, but that still only made the halftime totals 35 percent.

After two Magic free throws opened the scoring on the night, the Heat scored seven of the next nine points, but eventually, two baskets in the closing minute by the Magic made it 20-17 after the opening 12 minutes.

Benson had a strong first quarter, collecting four points and grabbing six rebounds. However, in the final nine minutes of that period, the Heat managed just eight points, primarily due to the fact that they missed on 18 of 21 attempts from the field.

When scoring finally picked up, Orlando was able to extend their advantage to 30-22. Then, over the next four minutes, the Heat put together a 14-5 run to take the lead, only to see the Magic answer with a pair of threes to make it 41-36 in favor of Orlando. A pair of scores on each side then sent the teams to halftime with the Magic maintaining a 45-40 lead.

During the third quarter, Orlando gave hints of pulling away, but on four separate occasions, Miami chopped their deficit to four. Then, in the closing seconds, the Magic closed out the quarter with a basket to make it 62-56.

The Heat will next be in action on Saturday night when they travel to face the Houston Rockets in a road clash set to tip off just after 8 p.m.
[xyz-ihs snippet=”Responsive-Ad”]