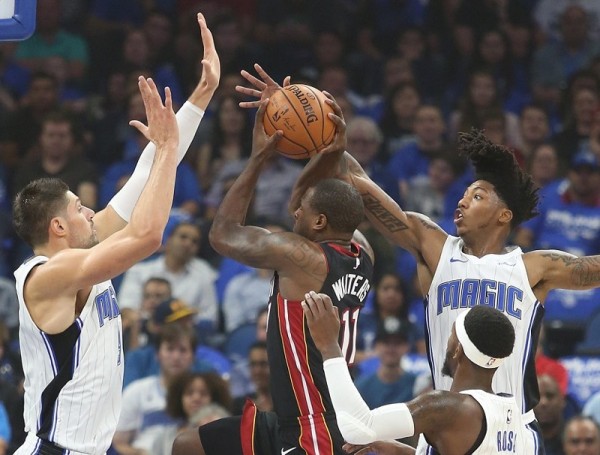 (Orlando, FL) – Despite a valiant comeback attempt in the fourth quarter by the Miami Heat (0-1) in their season opener, the Orlando Magic (1-0) were able to hold their own at home en route to a 116-109 victory at Amway Center.

“We were on our heels the majority of the night,” Heat head coach Erik Spoelstra said. “You have to give credit to Orlando. They play with great speed, athleticism and pace.”

Heat star center Hassan Whiteside had one of the best games of his career, as Orlando withstood a furious rally from Miami.

After they trailed by as many as 17 points early in the fourth quarter, Whiteside and the Heat were able to cut the Magic lead down to just two points, but it wasn’t enough.

Whiteside, who finished with a monstrous 26 points and 22 rebounds, knows the Heat can bounce back from this performance.

“We’ve got to go back to the drawing board and look at the film,” Whiteside said after the game. “Look at the opportunities we missed on defense. Just learn from it.”

Unfortunately, Magic guard Evan Fournier put a quick stop to the Miami surge after he scored seven of his team-high 23 points in the final two and a half minutes of the game.

In addition, Magic center Nikola Vucevic pestered the Heat all night as he went off for 19 points, 13 points, two blocked shots and two steals.

Heat forward Justise Winslow, who came off the bench for 10 points and four boards, reiterated that Miami must do better on the defensive end in order to win games.

“We’ll be alright. First game, of course you want to win, but it is what it is,” Winslow said. “So we’ve got to figure out going forward how we’re going to do a better job defensively by keeping them out of the paint. Just limiting the easy ones in transition around the basket.”

As a team, the Heat were able to go 13-of-17 from the charity stripe but struggled mightily from behind the arc as they only shot a measly 8-of-30.

Up next, the Heat will return home for a lengthy six-game homestand beginning on Saturday night when they take on the Indiana Pacers (1-0) at American Airlines Arena. The contest, which will tip off shortly after 8:00 p.m. ET, will be broadcast live locally on Fox Sports Sun.
[xyz-ihs snippet=”HN-300×250-TextnImage”]