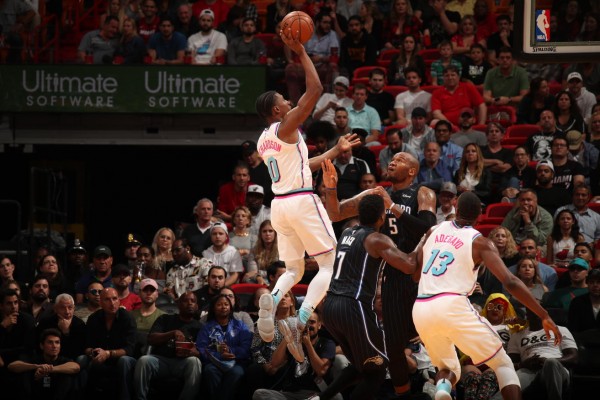 (Miami, FL) — Missed opportunities down the stretch resulted in the Miami Heat watching another dramatic rally go to waste as they fell 111-109 to the Orlando Magic at American Airlines Arena on Monday night. The contest marked the first home clash for Miami after a four-game road trip.

The Heat had trailed 107-93 with 8:17 left in regulation before then running off 12 unanswered points to make it a two-point game with 4:23 left. Following an Orlando basket, Miami answered with two scores of its own, the latter tying the game at 109 with 2:53 remaining.

The Magic would score what turned out to be the winning basket on a dunk with 1:31 to play, with the Heat missing on all of their last five shots from the field. The end-of-the-game drama was set up when Orlando turned the ball over with 13.3 seconds left.

On the second of two missed shots, Tyler Johnson‘s blocked shot out of bounds was originally ruled defensive goaltending on Orlando’s Bismack Biyombo. However, the call was reversed, with the Heat getting one final opportunity with just 1.8 seconds left. That came up empty when a Biyombo deflection of a Justise Winslow pass sealed the game for the Magic.

“It was a good move on their part,” Heat head coach Erik Spoelstra said. “They put Biyombo on the ball and he was able to deflect it.”

Josh Richardson led the Heat with 20 points, while Hassan Whiteside and Bam Adebayo contributed double-doubles. Whiteside scored 19 points and grabbed 14 rebounds, while Adebayo came off the bench to toss in 18 points and haul down 10 rebounds.

“The effort was there for probably 18, 19 minutes of the game,” Richardson said. “The first few minutes we came out tough and we were tough down the stretch, but I think we had a lull in the middle of the game and we gave them life.”

“We can’t come in with solutions, like we’re going to change our whole offense or just be too drastic,” Richardson said. “We just gotta approach like every other day and fix what we did wrong.”

With the Heat leading by nine to start the second quarter, the game’s momentum shifted as the home team’s shooting touch faded for a good portion of the period. They connected on just 35 percent of their field-goal attempts, while the Magic matched the Heat’s first-quarter numbers from the field with 55 percent. That chopped Miami’s lead to one at 60-59 at intermission.

“The defense just dropped off considerably,” Spoelstra said. “The level of urgency and level of detail and enthusiasm to defense wasn’t there.”

The third quarter saw virtually the same offensive numbers for the Magic, which were boosted because of another strong period of ball movement. Orlando handed out seven assists and nailed four more 3-pointers, numbers that translated into a 93-87 advantage entering the final quarter.

“It’s hard to explain what happened in that third quarter,” Spoelstra said. “I just don’t have an explanation for it.”

The slide during the middle two quarters was in contrast to the opening period, when the Heat managed to build up multiple double-digit leads. That was primarily due to their 55 percent shooting from the field and their domination on the glass, which saw them hold a 15-5 edge in that particular category. By the time the quarter had ended, Miami was in the lead by a 35-26 score.

“You have to play a full 48 minutes, four quarters, obviously, and we paid the price for that,” Spoelstra said.

During those opening 12 minutes, the Heat suffered a key injury as starter Kelly Olynyk left the game after just six minutes on the court with a strained left shoulder. His entire output during his short night was a single assist.

“I talked to the training staff and have to see how it reacts and then evaluate it,” Olynyk said.

The Heat will have Tuesday off, but will presumably need their A game on Wednesday night when they host the red-hot Houston Rockets. That game will tip off just after 7:30 p.m.
[xyz-ihs snippet=”HN-300×250-TextnImage”]