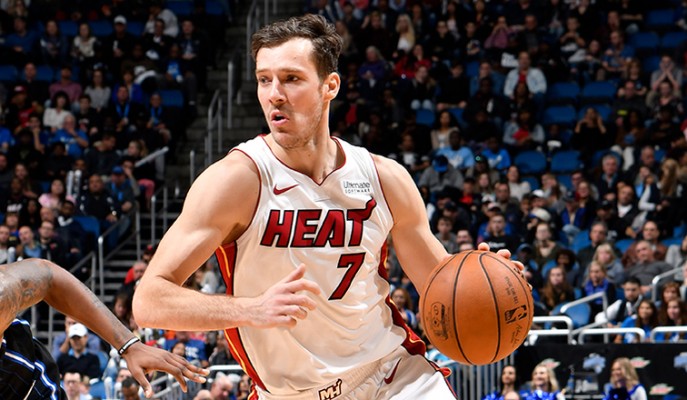 (Orlando, FL) – After the blowout loss the Miami Heat suffered on Friday night, there was definite concern that they might’ve suffered from a bit of a hangover. During the first half of Saturday night’s game against the Orlando Magic, that hangover seemed to be taking full effect. The Heat looked to be on their way to a second loss in as many days early in the game, but they were able to regroup at halftime and come back to win in a thriller, 117-111.

“It was as ugly as it can get in the first half again. Started to look like it was going in the same direction as last night,” Heat head coach Erik Spoelstra said following the game. “Our guys gathered themselves, basically the halftime was them. I just stepped back and let them talk and figure it out, and a much different disposition in the second half. I was speechless last night after that game, I feel like that a little bit right now.”

After a dismal first half in which Miami let up 66 points on the defensive side, Saturday night’s game was trending towards a blowout loss. Miami’s defense struggled in transition, letting up 24 fast-break points, and its shooters failed to find any kind of rhythm. By halftime, the Heat were looking at a 16-point deficit at 66-50 as they struggled to find an answer for the Magic on both ends of the court.

They found that answer during the halftime break, however. While they struggled early on in the third period, by the halfway point, the Heat had pulled to within 10 points at 79-71. Much of their third quarter surge was thanks to Tyler Johnson, who finished the night with 31 points on 12-of-18 shooting.  By the end of the third, Miami had reduced its one-time 18-point deficit to just six points, 92-86, going into the final frame. That was when the real show began.

“We just started to get stops, I think that was the biggest thing. In the first half we were having to run back in transition the whole time, they were just running, and that depletes you,” Johnson said of Miami’s third-quarter turnaround. “We started getting stops and we were able to settle in offensively and we just got into a good rhythm.”

Early in the fourth period, both teams battled back and forth and the Magic fought to hold onto their thinning lead. Just as Johnson had led his team in the third quarter, Goran Dragic led Miami in the fourth. He finished the night with 25 points, eight assists, four rebounds, and two steals. Much of that production came in the final quarter of the game as he hit clutch shot after clutch shot and clamped down on the defensive end as well.

With 7:34 left in the game, Dragic passed the ball to Bam Adebayo who slammed home the alley-oop and brought the deficit to within one point at 98-97. Magic forward Jonathan Simmons answered with a 3-pointer and Aaron Gordon added to the Orlando lead. With just over six minutes left in the game, it looked like the Magic were going to get away with the win.

Their lead didn’t last long, however.

Wayne Ellington hit a 3-pointer with just over five minutes remaining in the game to bring the deficit back to three points. Less than two minutes later, Dragic hit a three-point shot of his own. Josh Richardson continued the charge on the following offensive possession with a much-needed jumper with 2:38 left in the game to bring the contest to a tie for the first time since early in the first quarter.

The Heat went on to finally grab the lead at 107-105 with just over two minutes left in the game and they never looked back. While the Magic managed to bring the game to within one point when Gordon was fouled shooting a 3-pointer, Johnson and Dragic iced the game in the final minute to secure the stunning come-from-behind win.

Now back to two games over .500 on the season, Miami will head back to South Florida to face off against another Eastern Conference playoff hopeful in the Detroit Pistons on Wednesday night.
[xyz-ihs snippet=”HN-300×250-TextnImage”]