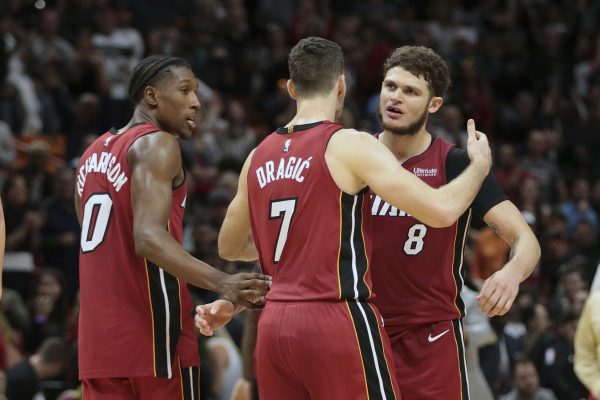 The Miami Heat will have to utilize every active player on its roster Friday against the Chicago Bulls, as Goran Dragic (knee), Tyler Johnson (hamstring), and Dion Waiters (ankle) did not travel with the team to Chicago due to injuries.

In addition, the trio of injured players will also miss Sunday’s game against the Toronto Raptors.

INJURY UPDATE: Goran Dragić (knee), Tyler Johnson (hamstring) & Dion Waiters (ankle) did not travel with the team and have all been ruled out of tonight’s game in Chicago & Sunday’s game in Toronto.

Dragic has been dealing with a lingering right knee issue this season. It was reported on Monday that the guard had his right knee drained and would be sidelined for the next few games.

The point guard is expected to return to game action at some point next week. He’s currently already missed five games this season, and being absent from Chicago and Toronto will add to his absence total.

“We don’t want to do no procedure if it’s not necessary,” said Dragic to the media on Monday in regards to his knee procedure. “So, yeah, I was relieved it’s just a fluid. They took the fluid out this morning and from there on I need to rest a little bit.”

Johnson will also not be joining the Heat’s road trip after suffering a hamstring strain in Monday’s practice. The 26-year old guard has become an integral part of head coach Erik Spoelstra’s offense, particularly with the roster being thin on ball-handlers/playmakers at the moment. He’s currently averaging 11.4 points, 2.4 assists, and 3.3 rebounds per contest.

Waiters remains out with ongoing rehab from an ankle injury. He has no immediate timetable on his return.

The Heat will look to improve its record without key players against the Bulls, who are one spot beneath them in the Eastern Conference standings. The tougher opponent will come Sunday when they face the Raptors, who currently control the No. 1 seed in the East with only four losses to date.
[xyz-ihs snippet=”HN-300×250-TextnImage”]