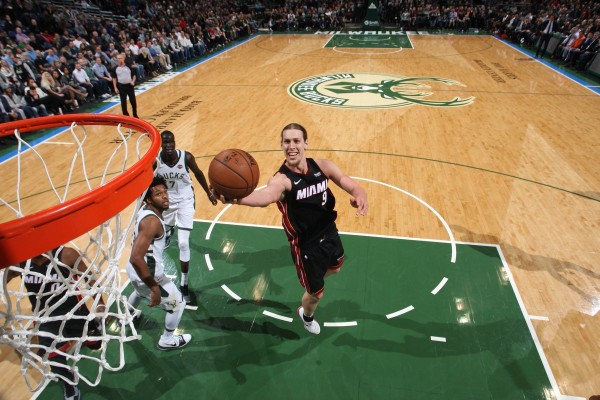 (Milwaukee, WI) – After losing their first game of 2018 earlier in the week, the Miami Heat had the opportunity to prove that their recent winning streak was not a fluke when they traveled to take on the Milwaukee Bucks on Wednesday night. The two teams had met just days before when the Heat had bested the Bucks in Miami on Sunday and they looked to do the same in front of an away crowd.

While Miami trailed for much of the game, it was able to perform best when it mattered most and got away with the win, 106-101.

“I think the first half was played on their terms, in their house, at their pace. They’re an explosive offensive team as you can see,” Heat head coach Erik Spoelstra said following the game. “In the second half it was a little bit more to our liking. We stepped up more defensively. Got them more to the end of the clock, preventing them from just the easy ones in the paint, and we were able to grind it out, somehow, at the end.”

After trailing for the first ten minutes of the third quarter, the Heat finally caught fire as the game neared its final frame. Wayne Ellington, who finished with 11 points, five rebounds, and four assists, put an exclamation point on a 9-1 Miami run when he hit a long 3-pointer to give his team a 78-77 lead. The Bucks managed to claim a one-point advantage before the end of the third quarter, but it was clear that fans were in for an entertaining finish.

Milwaukee jumped out to a five-point lead, 83-78, after dominating the first two minutes of the final frame. Then, Kelly Olynyk, who scored 10 of his 15 total points in the fourth quarter, took matters into his own hands. Olynyk scored six straight points in a minute and a half and with 8:35 left in the game, the Heat had reclaimed a one-point lead.

“We just needed to keep them out of transition, not give them anything easy, and our communication had to increase,” Olynyk said following the game. “When our communication is better we play together on both ends of the floor and we’re tougher that way.”

Both teams traded shots on the following possessions, and with six minutes left in the game, the score was deadlocked, 90-90. James Johnson broke the seal when he made a huge 3-pointer. Seconds later, Giannis Antetokounmpo answered with a 3-pointer of his own at the other end to tie the game back up.

Then, Justise Winslow and Hassan Whiteside showed the Heat what they had been missing during both of their extended absences due to injury.

First, Winslow lobbed a beautiful pass to Whiteside who alley-ooped it home to give Miami a two-point lead.

On the following defensive possession, Whiteside, who finished with a monster game of 27 points, 13 rebounds, and six blocks, came up huge yet again when he blocked Antetokounmpo on his way to the rim. Goran Dragic, who had 15 points, five assists, and four rebounds in the game, then passed the ball to Winslow who launched a 3-pointer from the corner.

In a matter of seconds the Heat had scored five straight and took a commanding 98-93 lead with just over three minutes left in the game.

“Just come out aggressive. I’ve been battling, I’ve been sick these last couple days. I just wanted come out here and give everything I’ve got, leave it all on the floor,” Whiteside said before reflecting on his impressive stat line. “The numbers are gonna be there with the minutes. Coach trusted me with 32 minutes tonight, the numbers are gonna come.”

The Heat clamped down defensively on the other end of the court, and when Johnson was sent to the line, he managed to extend their lead to seven points.

The Bucks made a desperate attempt at a comeback late in the game, and even made it interesting thanks to two deep three-point shots by Khris Middleton. Miami was able to capitalize on its trips to the free-throw line, though, and iced the game with ease.

The Heat’s ability to rebound from Monday’s loss was just another sign that their recent success was not a flash in the pan, but instead a sign of things to come. With this victory behind them, the Heat will look to begin yet another winning streak on Friday when they travel to New York to take on the Brooklyn Nets.
[xyz-ihs snippet=”HN-300×250-TextnImage”]