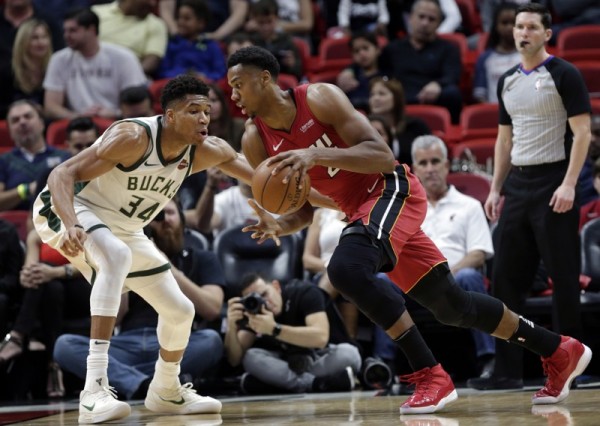 (Miami, FL) – The Miami Heat had a lot to prove in the game against the Milwaukee Bucks on Sunday afternoon. Not only were they looking to extend their six-game winning streak after a multi-day break, but they were also hoping to convince any doubters wrong by handing the Bucks, who currently sit at sixth in the Eastern Conference, a loss. They did just that with a dominant defensive display on their way to a near-blowout victory, 97-79.

“It felt like it was going down the wire. That’s how a head coach thinks. You gotta play it all the way to the end. Our guys really stepped it up in the second half. It was great to see those inspiring efforts,” Heat head coach Erik Spoelstra said. “It was good to see us put together one of our better, more complete defensive efforts for the entire game.”

With just over eight minutes left in the third period the game was tied, 44-44, and the Heat looked to be on their way to yet another close game. With the flip of a switch, though, they turned it on and quickly began to control the game.

Hassan Whiteside, who finished the game with 15 points, 10 rebounds, four blocks, and two steals, led Miami on a dominant four-minute run in which it outscored the Bucks 14-4.

Despite being up, 58-48, the home team refused to slow down. By the end of the quarter it had extended its lead to 12 points and was firmly in driver’s seat. The Heat continued to dominate the contest and with just over eight minutes left in the final frame, the lead had ballooned to 18 points, 82-64.

Milwaukee tried to claw back into the contest and went on a 7-0 run to bring the deficit to 11 points. Goran Dragic, who finished with a game high 25 points, helped his team retake control when he hit a deep 3-pointer with 5:19 left in the game. He scored again on the Heat’s following offensive possession to go up 14 points. Less than a minute later, Dragic nailed a three-point shot from deep to give Miami a 90-75 lead.

“We were engaged on defense and when we defend well, we get that confidence on offense. We really played together as a team, the ball was moving, we were making shots, and I think that was the key of the game,” Dragic said before discussing his impressive effort from beyond the arc. “I knew they were going to go in, I don’t know why I just had that feeling so I just shot it.”

Another bright spot in Sunday’s game was the return of Miami forward Justise Winslow. Winslow had been out with a knee injury since Dec. 13 and while he only played for 13 minutes, he put in a well-rounded game with three points, four assists, and four rebounds. Not only are the Heat playing their best basketball of the season right now, but they are now arguably healthier than they have been in quite some time.

Miami will look to continue their current seven-game winning streak tomorrow when it heads to Chicago to face off against the Bulls.

Monday’s game in Chicago will mark the start of a five-game road trip that will certainly test the Heat’s resolve. By the looks of it, they will rise to the challenge.
[xyz-ihs snippet=”HN-300×250-TextnImage”]