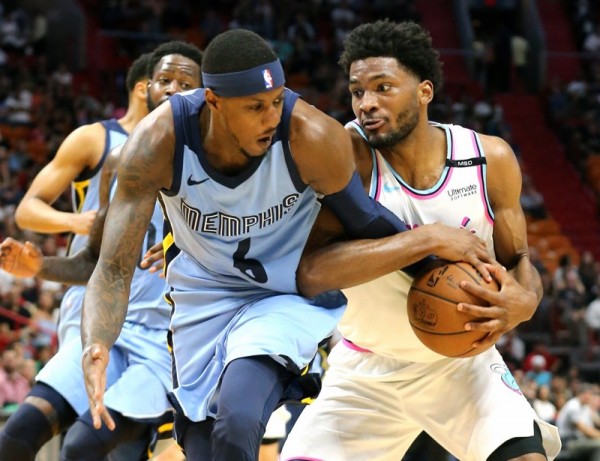 (Miami, FL) — Delivering a defensive shutdown during the third quarter helped the Miami Heat take control of their game against the Memphis Grizzlies and come away with a comfortable 115-89 win at American Airlines Arena on Saturday night. The victory ended a three-game losing streak for the Heat.

Leading 62-56 with just two minutes gone in the second half, the Heat put together a 30-14 surge over the remainder of the third quarter that gave them a whopping 22-point lead at 92-70. Smooth ball movement saw Miami dish out nine assists during the period, yet it was its defense that truly put the contest away as Memphis shot just 33 percent (7-of-21) from the field for the quarter. That effort was a drastic improvement from the 59 percent in that category that the Heat had allowed during the opening period.

The scoring punch provided by the Heat offense during their run was spread around, with seven different players making contributions. Chief among this group was Hassan Whiteside, who tossed in seven points, while both Tyler Johnson and Wayne Ellington each notched six.

“The way we win games is our defensive identity,” Johnson said. “Offensively, the way things work, it’s gonna be different guys, different nights, but one thing we can control is our defensive effort. So, that’s the thing that Spo’s (head coach Erik Spoelstra) been preaching to us.”

The fatigued Grizzlies, who like the Heat, were playing on the second night of a back-to-back, offered no comeback effort in the final quarter, with many of their key players having sat out the game. Miami built its lead up to as many as 31 points during those final 12 minutes, and over the entire second half, gave up just 37 points.

“I was pleased with the approach of our guys,” Spoelstra said. “Even though they (Memphis) were undermanned, playing a lot of young guys, we’re still building habits, holding them to 18 and 19 points in the third and fourth quarters, respectively.”

Johnson led all scorers with 23 points, including a perfect 9-for-9 from the foul line. He was followed by Justise Winslow, who scored 17 and had seven rebounds, and the pair of Ellington and Josh Richardson, who each collected 15 points. Rounding out the double-digit scorers were rookie Bam Adebayo, who picked up 13 points and snagged six boards, and Whiteside with 12 points and eight swipes off the glass.

“He (Johnson) was so aggressive, like a blur going to the rim,” Spoelstra said. “That’s the Tyler we saw before the (ankle) injury. He probably needed that All-Star break as much as anybody. Just to have those days off and let his body rest.”

At the start of the game, the Heat jumped out to an early 14-8 lead. After the Grizzlies then ran off seven unanswered points, the two teams settled into some fast-paced back-and-forth play for the remainder of the period. By the time the horn sounded, Miami was holding a 34-31 advantage.

“The focus and the urgency, to do it differently,” Spoelstra said about what was different for the Heat, as opposed to their recent struggles. “It’s time. There’s been enough talk about it.”

The Heat pushed their lead into double-digits in the first three minutes of the second quarter, courtesy of a 10-0 run that gave them a 46-35 lead. That solid shooting touch began to taper off for both teams for the remainder of the period, though Miami still managed to take a 60-52 lead into halftime.

“We just started getting stops,” Winslow said. “They had a lot of guys out, they were playing a little free, getting up and down. But once we settled in, we were able to get the stops we needed.”

The contest was the first home game for the Heat since the All-Star break, with pregame ceremonies paying tribute to the victims of the Feb. 14 school shooting at Marjory Stoneman Douglas High School.

The Heat return to action on Tuesday night when they stay at home to face the Philadelphia 76ers in a game that will tip off just after 7:30 p.m. ET. Miami will seek to gain a measure of revenge after its last two trips to Philly ended in a pair of agonizing losses.
[xyz-ihs snippet=”HN-300×250-TextnImage”]