Miami Heat vs. Memphis Grizzlies Game Recap: Putting It All Together 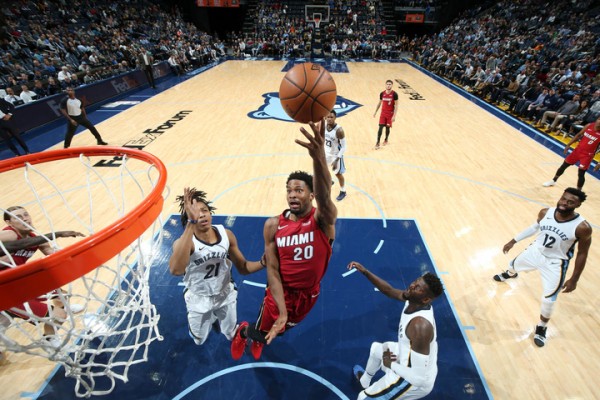 (Memphis, TN) – The Miami Heat have shown an ability to play well on both sides of the court at different times throughout this season, but have often failed to do so when it matters most. That all changed on Monday night when the Heat shot lights out on offense, and played tenaciously on defense down the stretch on their way to a lopsided victory, 107-82, against the Memphis Grizzlies.

“I liked how we got stronger, tougher, more resilient in both second halves,” Heat head coach Erik Spoelstra said of his team’s back-to-back wins. “Different guys in each game. Took a lot of pressure off ourselves by getting multiple stops and then the offense just becomes a little bit easier going down the other end.”

The game had been a close contest for the entirety of the first half and Miami only led, 45-42, when it headed into the locker room at halftime. Memphis even managed to retake the lead early in the third period, but halfway through the third quarter, the Heat turned it on and never looked back. Goran Dragic, who finished the game with 19 points, five assists and five rebounds, jumpstarted his team when he hit a 3-pointer on one possession, got to the line and hit both free throws on the next, only to hit a jumper and follow that up with a silky assist to Bam Adebayo on the next two possessions. While the Heat only led by three points following Dragic’s one-man show, his teammates immediately responded and pushed the lead to ten points with just over two minutes left in the third quarter.

Dragic was Miami’s scoring leader in the game, but Adebayo had a fantastic game in his own right and finished with a 14-point, four-rebound, two-assist, two-steal, and two-block performance.

By the beginning of the final frame, the Heat were in control with a 10-point lead and looked to do something they had failed to do on multiple occasions this season: close out a game. While some teams might have been satisfied with a double-digit lead, the Heat made it clear that they had no intention of taking their foot off the pedal.

With over 10 minutes left in the game, Wayne Ellington, who finished the game with 12 points, hit a 3-pointer. Just two offensive possessions later, Tyler Johnson hit a three of his own, followed directly by a 3-pointer by Justise Winslow. Miami went on to hit four more 3-pointers in the final quarter. At the same time, it clamped down defensively as the Grizzlies could do nothing but watch the Heat’s lead grow as the final whistle approached.

The Heat’s strong play on both sides of the court not only showed up on the court, but on the stat sheet as well. While Miami shot 56.1 percent from with field and a jaw-dropping 51.9 percent from beyond the arc, it held the Grizzlies to just 38.9 percent from the field and 29.6 percent from three-point range. They also outperformed their opponents in most major defensive categories, outrebounding Memphis, 35-31, and bettering them in both steals, 8-6, and blocks, 8-1.

Miami enjoyed strong individual performances as well. Along with Dragic, Adebayo, and Ellington, Tyler Johnson, James Johnson, Josh Richardson, and Dion Waiters all posted double-digit scoring nights. Richardson’s 17-point performance was perhaps the most promising as the youngster continues to grow as an offensive weapon and has now put up double-digit point totals in six of the last seven games.

The Heat’s season looked to be in trouble after they had lost four of five games, but they have managed to flip a switch and have now put together back-t0-back victories for just the fourth time this season. They will look to tie their season-high winning streak of three games this Wednesday when they return home to South Florida to face off against the Portland Trail Blazers.
[xyz-ihs snippet=”HN-300×250-TextnImage”]