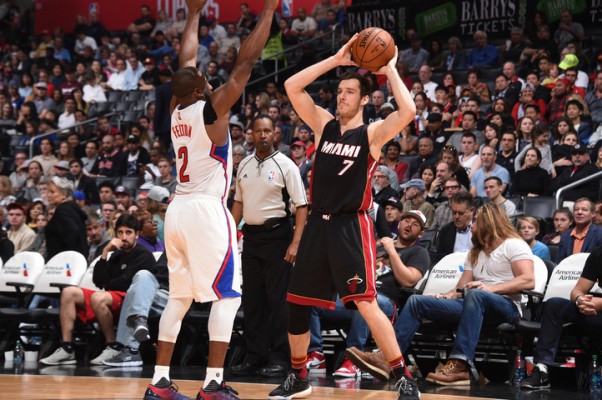 (Los Angeles, CA) – Frigid shooting during the first three quarters helped doom any upset hopes for the Miami Heat as they dropped a 98-86 decision to the Los Angeles Clippers at Staples Center on Sunday afternoon.

Throughout the first half, the Heat were plagued by weak shooting from the field, heading to halftime with a miserable 31 percent shooting percentage in that category. Among the team’s starting unit, that number was even lower at 29 percent. The numbers for both categories improved slightly after the break, though much of that improvement came during garbage time.

Four players, led by Goran Dragic, finished scoring in double figures for Miami. Dragic contributed 24 points and also added five rebounds and assists each. Meanwhile, Hassan Whiteside returned to the lineup and notched a double-double with 15 and 13 rebounds. Both Johnsons ended up with similar numbers: James Johnson added 12 points and six boards, while Tyler Johnson finished with 12 points and seven boards.

“It took me a little time to get adjusted to the speed,” Whiteside said about his return. “But I feel overall that I played pretty good.”

The first quarter saw Dragic connect on a 3-pointer to start off the scoring, though that was followed by an 18-7 run from Los Angeles. The Heat were able to tighten things up in the final five minutes of the opening period with a 9-2 run of their own, trailing by a single point at 21-20 as the horn sounded.

However, soon enough, the Heat’s cold shooting eventually led to them trailing by as many as 15 before both teams headed to their respective locker rooms with the Clippers holding a 52-39 advantage.

The Clippers were able to take such a commanding lead heading into halftime due to 54 percent shooting from the field during that second quarter. Throughout the first half, their smooth ball movement also allowed them to rack up 16 assists.

“You try and work on things you see a ton of and we spent a great deal of training camp-like practice yesterday on pick-and-roll defense,” Heat head coach Erik Spoelstra said in trying to explain the second-quarter defensive slump. “We spent a full hour drilling over and over ad nauseum.”

Digging out of that hole was going to be difficult enough, with the Clippers’ 14-4 run to start the second half giving them a 66-43 lead and effectively ending the contest. The Heat were able to reduce it to an 11-point deficit during that same period, but that would be as close as they would get before a final fourth-quarter surge by Clippers head coach Doc Rivers’ squad.

The level of frustration in the midst of another loss was too much for Miami’s Dion Waiters, who was ejected during the third quarter after throwing an elbow to the back of Los Angeles guard J.J. Redick’s head.

The Heat’s road trip has two more games on the agenda, with their Tuesday night contest in Oakland against the Golden State Warriors next up. That game will tip off just after 10:30 p.m. ET.
[xyz-ihs snippet=”Responsive-ImagenText”]