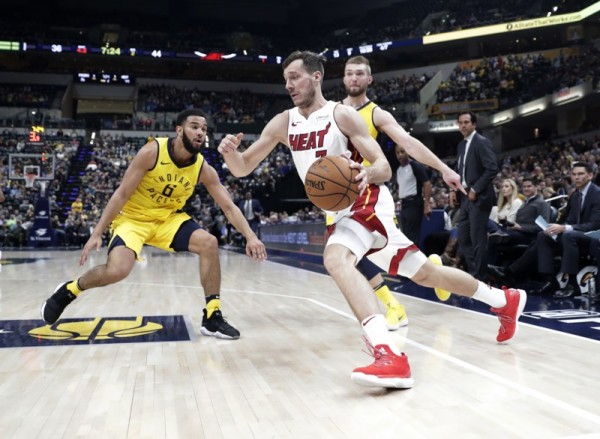 (Indianapolis, IN) – The Miami Heat had not won at Bankers Life Fieldhouse in 10 regular-season tries. In Wednesday night’s matchup against the Indiana Pacers, they looked to curb that trend, extend their five-game winning streak, and further cement their place amongst the Eastern Conference’s best teams. Miami led for the vast majority of the game. While things got a little too close for comfort down the stretch, it was able to clamp down defensively and make big shots when they mattered most on its way to another big win, 114-106.

“Guys are really starting to develop that resiliency,” Heat head coach Erik Spoelstra said following the game. “To understand that there’s going to be a lot of highs and low in a game. You have to continue to try to stay the course. Play your game, compete, play as consistently to whatever your identity is as much as you can, and then weather storms.”

The final quarter of the game began like a heavyweight battle as both teams made their move to try and take control of the game. While the Heat led for much of the night, and by as many as 14 points in the third period, the Pacers roared back. By the beginning of the final quarter, the Heat’s lead had shrunk to just six points, 86-80.

The Heat jumped ahead, 88-80, early in the fourth period after Tyler Johnson, who finished the night with 15 points and five rebounds, hit two quick field goals. The lead grew to double digits when Bam Adebayo, who played well off the bench with 15 points and five assists, hit a shot in the paint with just under ten minutes left in the game.

The Pacers refused to go away, however. Lance Stephenson and Victor Oladipo led their team in the final quarter as they clawed back. After being down by 10 points early in the quarter, the Pacers outscored Miami 17-7 to tie the game up at 97-97 with just over five minutes left in the game.

Johnson came through in the clutch once again when he hit a long 3-pointer to put the Heat up, 100-97, with 4:08 left to play. The Pacers cut the lead back down to one point on their following offensive possession, but Wayne Ellington, who finished with 15 points and five rebounds, hit back moments later with a jumper of his own. Oladipo was then sent to the line and made both shots to bring the Indiana deficit down to just one point.

Thankfully for Miami, Goran Dragic and Hassan Whiteside came up big in the clutch. First, Whiteside, who had a very strong performance with 16 points, 15 rebounds, and five blocks, converted on a tip-in shot to extend the lead to three points. Then, Dragic, who led the team in scoring with 20 points and nine assists in the game, hit a long jumper. With just over two minutes left in the game Miami was up, 106-101.

“We do it for Heat Nation. Heat Nation keep believing. Keep believing in me, keep believing in us. Keep believing, man. We’re working hard, we go hard for y’all. Every night we out here putting our bodies on the line, we love y’all,” Whiteside said following the game. “We came in here, we knew we had a scrappy team. This team played at a fast pace. We had a tough win in Toronto so we came in here with the mindset that it’s not enough. We’re not satisfied. We’re going to keep going. We’re looking at the top, we’re going to keep coming in here, it’s not enough. We’re hungry.”

The Heat clamped down defensively and didn’t let the Pacers score for over a minute following Dragic’s clutch jumper. While the Pacers were finally able to score with 1:24 left on the clock, Ellington put the final nail in the coffin when he hit a deep three to put Miami up 109-103 with just 25 seconds left in the game. Both teams were sent to the line multiple times following Ellington’s big shot, but it was clear the game had been decided as dissappointed Pacers fans headed for the exits.

With each passing game the Heat continue to make their case to be considered amongst the best teams in the Eastern Conference. With their win tonight, they jumped the Washington Wizards to sit alone atop the Southeast Division standings.

There is still a lot of basketball left to be played in the 2017-18 season, but the Heat have seemed to have found a winning formula. They will get the chance to test that formula against a potential playoff team on Sunday when they head back to South Florida to host the Milwaukee Bucks before embarking on a five-game road trip that will surely put their recent success to the test.
[xyz-ihs snippet=”HN-300×250-TextnImage”]