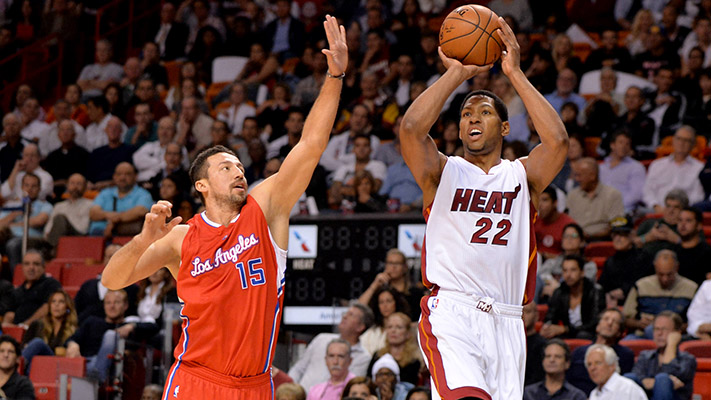 (Indianapolis, IN) — Wednesday afternoon the Miami Heat (14-18) take on the Indiana Pacers (11-21) at Bankers Life Fieldhouse for their final matchup of the 2014 calendar year.

Both the Heat and Pacers look to end 2014 with one final win, after both teams suffered losses on Monday to the Orlando Magic and Chicago Bulls, respectively.

It’s been tough times in Miami for the Heat who had a 2-5 homestand but were still able to come out on top on Christmas Day over former teammate LeBron James and the new-look Cleveland Cavaliers. After a one-point loss to the Magic at home on Monday, the Heat prepare to play seven of their next eight games on the road beginning in Indiana, where Danny Granger will be in his former team’s house for the first time since he’s left. Dwyane Wade commented on Granger’s reunion with the Pacers.

“I think it will be [a big night for Danny Granger]. Other than his little stint with the Clippers, he’s spent his whole career there. It has to be a little weird for him to go back there. The one thing I’m happy about is his confidence in his basketball play going back there, but it’s still going to be weird for him to be on this side of those guys after all he’s done for the organization to get them to the point where they are now. The best thing for him would be to go in there and walk out with a win.”

And a win just might not be out of the question for Granger or Miami. In his past three games, the small forward who spent eight and a half seasons playing for the Pacers, has averaged 16 points on 15-of-25 shooting from the floor and 9-of-14 from three-point land.

“It’s going to be surreal,” Granger admitted, “I knew it was going to have to come at some point, going back, playing on the other side, when I played there for so many years, pretty much my whole career. It’ll be different. But I’m excited to see me old teammates, trainers, everybody I know going back.”

The Heat may have dropped eight of their last ten games in Miami, but they have an 8-6 record on the road. Aside from Josh McRoberts, who is out for the season with a knee injury, it will also be the first time Miami has had a healthy team in months, allowing Miami Heat coach Erik Spoelstra to finally take control of his lineup.

“Coach has a bunch of decisions to make,” said Chris Bosh during Tuesday’s practice. “He has to do his job and figure things out just like we have to do our jobs and figure things out. Whoever he puts out there, we have to execute on defense and on offense. We need to get a bucket when it’s time to get a bucket and we have to make a stop when it’s time to make a stop. He’s going to put out the best group he feels needs to be out there, and we’ve just got to respond as players and we haven’t done a good job of that. I think we can admit that. We’ve been struggling and it’s been up and down all season but there’s not going to be a change until we make a change.”

This may spell trouble for Indiana, who is also struggling to clinch wins on the home front. Similar to D. Wade’s final shot attempt against the Magic, C.J. Watson of the Pacers barely missed a three pointer at the buzzer that cost Indiana the game against Chicago, 92-90. The Pacers are one of the lowest-scoring teams in the NBA, averaging just 94.5 points per game. Rodney Stuckey and Roy Hibbert only managed a combined 11 points against the Bulls in Monday night’s game.

Coach Spo remains positive going into Indianapolis, and is determined to end the year on a high note.

Tipoff is set for 3:00 pm EST and will be broadcast on Sun Sports.
[xyz-ihs snippet=”Responsive-Ad”]