Miami Heat vs. Houston Rockets Game Recap: Houston, You Have a Problem 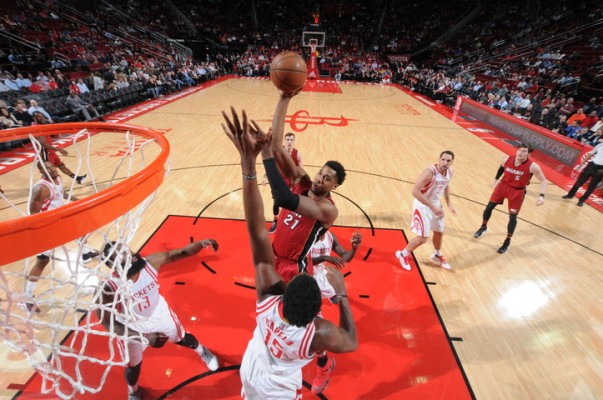 (Houston, TX) – In their final game before the 2016-17 NBA All-Star break, the Miami Heat (25-32) never trailed and managed to pull off an improbable victory over the Houston Rockets (40-18) at Toyota Center on Wednesday night to get back into the win column.

“It started with everybody being open to the truth and holding each other accountable for the last two games.” said Heat head coach Erik Spoelstra during his postgame press conference. “Even coming out with an effort today defensively where we could feel our presence, that doesn’t guarantee anything. It just has to be how we have to play and commit to that.”

Rising star center Hassan Whiteside had another monster game on both offense and defense for the Heat with a double-double effort, going off for 23 points (9-of-13 shots made from the field) to go along with 14 rebounds and a whopping five blocked shots.

“Our backs were against the wall. We won 13 of our last 15 games, we dropped two and people started going out of control,” Whiteside said after the victory. “So we had to come in here and get a win, you know.”

Heat shooting guard Dion Waiters also had 23 points of his own to go along with nine rebounds and seven assists on the evening, while point guard Goran Dragic continued his superb play with 21 points and five assists.

Despite superstar James Harden’s 38 points, 12 assists and 12 rebounds, the Rockets were never able to gain the lead against the Heat on Wednesday night. After the Heat increased their lead to as many as 20 points late in the third quarter, the Rockets were able to only get as close as an eight-point deficit in the fourth quarter.

“We came in with the mindset of being the most physical team,” Whiteside said. “Being physical and playing Miami Heat basketball. I told Heat Nation we’re a whole different team. We out here working every day and getting better. Every day is a learning process.”

For the Rockets, power forward Ryan Anderson was second on the team in scoring for Houston with 16 points and six rebounds, while center Clint Capela and shooting guard Eric Gordon each had 12 points on the night.

Up next, the Heat will head into the All-Star break and not play again until Friday, Feb. 24th against the Atlanta Hawks. The contest, which is scheduled to tip off shortly after 8:00 p.m. ET, will be broadcast live locally on Fox Sports Sun.
[xyz-ihs snippet=”Responsive-ImagenText”]