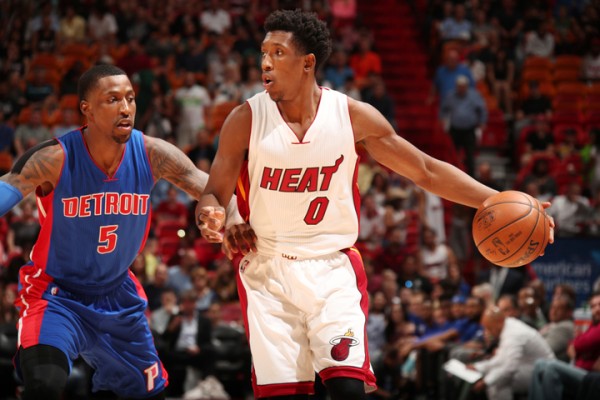 The Heat had only nine players in uniform due to Hassan Whiteside, Goran Dragic, Dion Waiters, Josh McRoberts, Justise Winslow sitting out with various injuries and were forced to use their 13th different starting lineup this season.

Throughout the evening, the absence of Whiteside was glaring as the Pistons outscored the Heat 42-26 in the paint. Specifically, Andre Drummond had a field day near the rim scoring 25 points and collecting 18 rebounds.

The Heat were sharing that ball often and making the extra pass which made their sharpshooting infectious. They assisted on 20 of their 24 field goals in the first half.

The team’s offense after halftime, however, was a completely different story.

In spite of those gaudy shooting numbers, Detroit was only down eight points at the break. The Pistons started to close the lead and went on an 11-0 late in the third to retake the lead from the Heat.

After making tough, contested shots in the first half, Miami could not buy a basket in the second half and struggled to make wide open shots.

The Pistons were led by Drummond, Kentavious Caldwell-Pope and Reggie Jackson who combined for 75 points. Caldwell-Pope caught fire and scored 12 of his 23 points during that critical stretch in the third quarter. Reggie Jackson also had a strong game and led all scorers with 27 points.

The Heat gave up another 11-0 run in the fourth quarter including an early stretch where they did not make a field goal for five minutes and let the Pistons seize control of the game for good. Overall, they shot 28 percent from the field in the second half.

Miami mustered a last-ditch effort at the end to make the game interesting when James Johnson hit his fourth three of the night to cut the Pistons lead to seven with about two minutes to go. But it was too little too late. Reggie Jackson responded by nailing a three from the top of the key to ice the game. Johnson was the Heat’s leading scorer with 20 points, while also adding seven rebounds.

“I told the guys there’s nothing to be ashamed of with this game. We just got outplayed down the stretch,” said Spoelstra.

The Heat lost their fifth straight game and the schedule does not get any easier. Miami will head out on six-game, 11-night West Coast road trip which will begin with a matchup against the Phoenix Suns on Tuesday night.

“We’ve been making strides in the last couple games so I think we can come out and string a couple of good ones together,” said Josh Richardson who had 14 points and eight assists (career-high) on Sunday.